Results of the 2015 Worldwide Iwamoto Awards 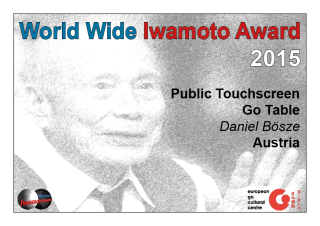 During the opening ceremony of the 59th European Go Championships in Liberec, Czech Republic, we presented the results of the 2015 Worldwide Iwamoto Awards. It was the first time that we organised the competition on a global scale, preceded by four European editions in 2001, 2003, 2007 and 2012 (click here to view all entries of previous editions). Mr. Yamashiro Hiroshi 9p, the vice-pesident of the Nihon Ki-in, was present at the ceremony and handed over the winner's certificate to Daniel Bôsze (Austria) for his project Public Touchscreen Go Table.