A public touchscreen Go table has been installed on Mariahilfer Straße, in the centre of Vienna, providing everyone regardless of age with an easy and inviting way to learn and play the game of Go. It features two 42" inch Full HD Screens in a weather-proof, unbreakable chassis that was customly designed. Running 24/7, protected from rain and sun by a pair of big sun shades, it is an extremely attractive spot for people to sit down and enjoy Go. Four players can play at once on the two screens with enough space for kibitzers. 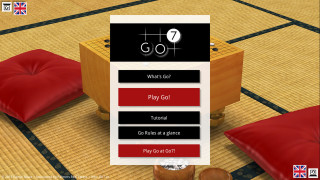 3DGoban, the software especially created for the table, offers an attractive 3D-rendered interface with traditional japanese tatami, kaya Go board and shell and slate stones. 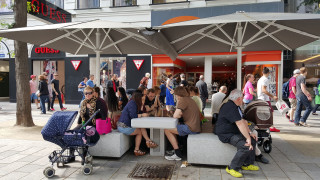 The Go Table is situated right in front of the Viennese Go Club Go7, at one of the most attractive spots on Mariahilfer Straße, directly at a metro exit. Since its Installation, it has proven extremely popular and is occupied nearly all the time, even at 3am in the morning. No major vandalism has happened so far.

With the touchscreen Go table on Mariahilfer Straße, we aim to give the game of Go as much public exposure as possible and let anyone in the public domain learn and play Go interactively, 24 hours a day with maximum attractivity.
Mariahilfer Straße is one of the busiest shopping streets in Middle Europe. Having been already crowded in 2011 with more than 70.000 customers daily, nowadays the popularty of it has soared to even higher levels thanks to the car ban. Mariahilfer Straße is especially popular with kids and students, but also with open-minded families and the young urban demographic. 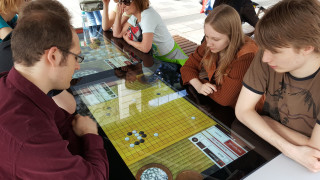 The Go table uses a complete custom design, because a similar public outdoor touchscreen table has never been created before. It is fully heated in the winter and cooled in the summer, with extra-bright screens and reinforced glass as a protection. During reconstruction of the street surface, a power line was laid to supply the table. The table along with its two concrete benches that were provided by the city are protected by two square 4 by 4 metres interconnected parasols. It is cleaned every two days by members of Go7. The software that runs on it has been specifically designed and written for the table and offers a simple and very intuitive interface.

On one of the busiest shopping streets in Europe, Mariahilfer Straße, directly in front of Go7.

Since the start of the project in October 2014, more than 15.000 games have already been played on the two screens. This amounts to nearly 100 games per day. Many new Go players have been attracted to Go7 because of it and a great number of children and adults try the game on the table every day. Of course some don't learn the rules and start to play right away, but even they have a great time. Often, there are people playing at the table who specifically come there to play Go. 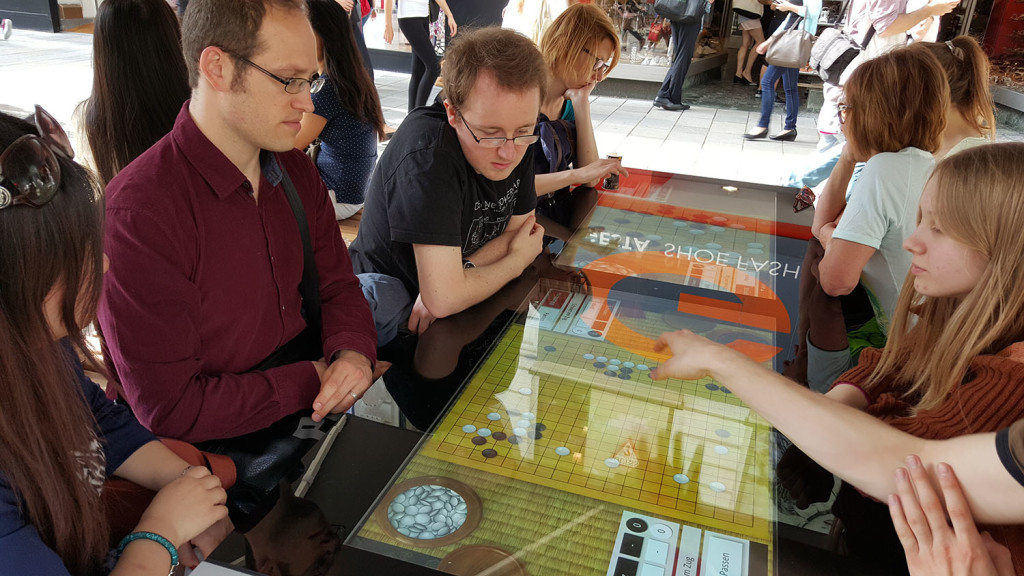 The project got huge exposure and quite a debate after the announcment of the project in Der Standard online newspaper, which enjoys the highest user counts of all online newspapers in Austria: Der Standard.
A public opening ceremony was held with Thomas Blimlinger on October 4th, 2014. Tables with Go boards, a Japanese food buffet and of course the Go Table itself attracted hundreds of people and was featured by Kurier, one of Austria's major newspapers: Kurier.
Since the Go Table is located at one of the most crowded spots in Vienna, it receives big attention. A large number of people are becoming new Go players every day.

The project was preconceived, created and implemented by Daniel Bösze, Board Member of the Austrian Go Federation. He spent nearly one and a half years voluntarily and unsalaried planning and designing the table itself, writing and designing the software and scheming and negotiating the Installation of the table on the street. Huge bureaucratic hurdles had to be overcome and everything had to be done in a very short time constraint since the project could only be implemented during the reconstruction phase of the street. Currently, he works on new features and improvements for the table's software.

Daniel had big support from the Austrian Go Federation, especially from Christian Anderson who served as a mentor and big advocate for the project, as well as from Michael Winkler, President, and Lothar Spiegel, who both made big efforts in supporting the project.

From the city of Vienna, Thomas Blimlinger, Susanne Hoeller, Robert Hart and Ulrike Pitro among many others helped to make the project a reality.

The costs for the Go Table's hardware and its installation on the street were sponsored by the CEO of Palmers Immobilien AG. He also sponsored the parasols and financed the contract that had to be closed with the city. All in all, the costs of the project amounted to around $20.000, not including the work hours for the writing the software and planning the project which were unpaid. The table itself cost around $11.000. 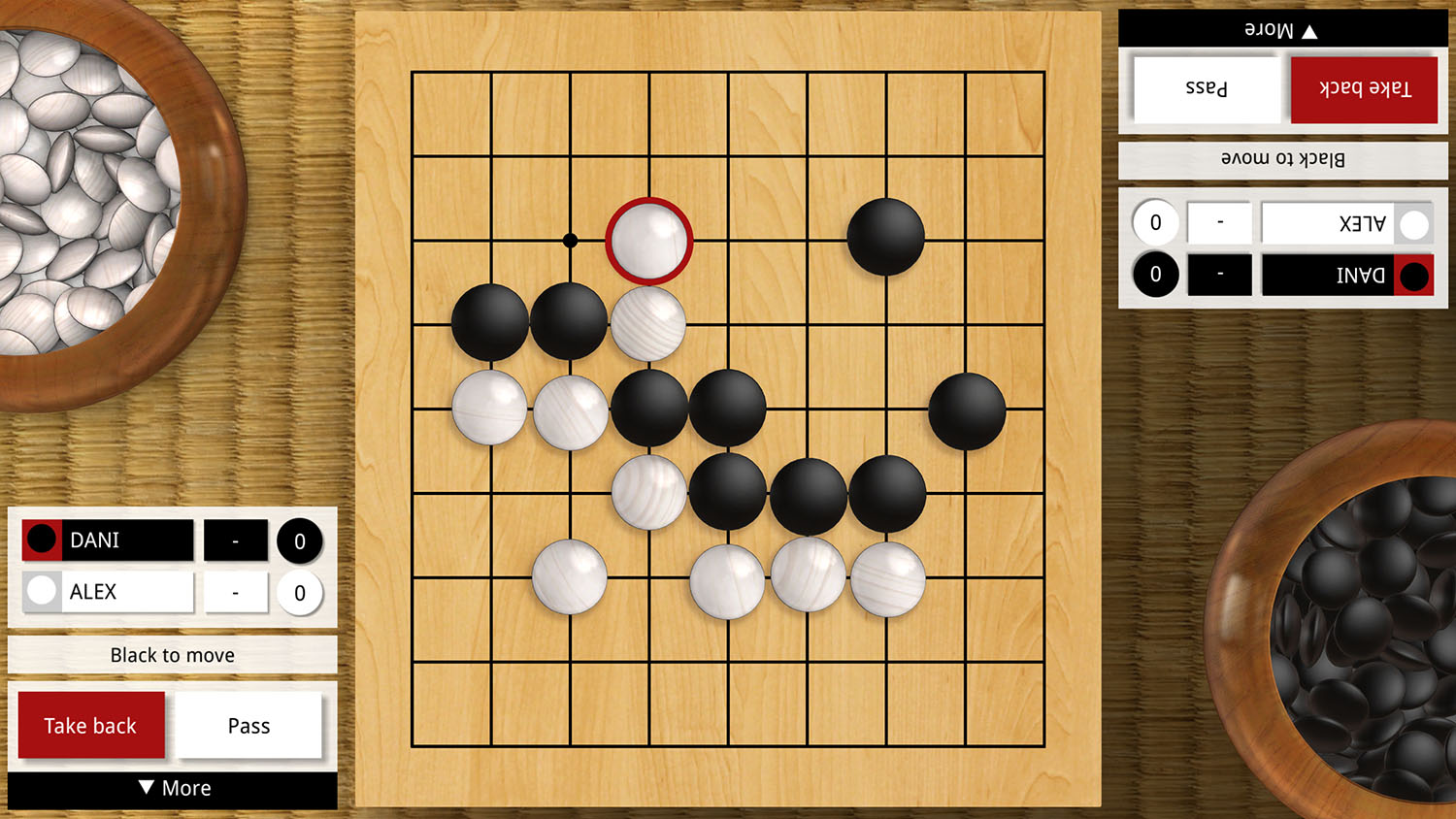 In the future, the Go Table will receive new features as the software is constantly developed further. Potential new features include:

The goal for the project itself would be to install another touchscreen Go tables in Vienna or even in other cities around the world. Since the software is ready for any language, the hardware has already been designed and a lot of refinement and improvement has been done since the opening day, implementation of a similar project somewhere else will be a lot easier. We really hope that the success of our project inspires other Go communities to replicate the project.

Due to his day-to-day job as a 3D graphics artist, Daniel's ressources are somewhat limited in terms of how much time he can spend on improving the software. In order to speed up development and to enable a potential release of 3DGoban on other platforms like tablets, a sponsor would be needed.