After a whole day of shooting, three days of cutting and a day of sound production the film was ready for broadcasting. Currently, we are supporting primary schools to incorporate the TV spot on Go as well as an introduction to Go and the Asian culture into their classes.In Germany, there is a famous TV program for children called "Sendung mit der Maus". For more than 30 years now, an animated cartoon mouse explains children aged 3 to 99 how the world works. On a weekend in September 2002, the mouse learned how to play Go! In a TV spot of six to seven minutes, Florian Chamot, a then nine year old Go child from Cologne, Germany, explains to the mouse team and all children watching the TV program how to catch stones and to build territory. And he showed the children that Go is a game with very simple rules where children can easily win against adults! The TV program was produced by the Westdeutscher Rundfunk (the main TV station ofNorth Rhine-Westphalia) with the assistance of Go players from Cologne in summer 2001.

The first contacts with the WDR have been made through two channels: First, Kalli Balduin, the "head" of the Berlin children Go activities, wrote an eMail to the "Maus", suggesting to feature Go in the "Sendung mit der Maus", as it is a game with very simple rules that even children can easily learn. Second, our long-term relationship with the "Museum of Eastern Asian Art" in Cologne, where the Cologne Go Tournament takes place each year, led to our involvement in the actual production. The WDR (which is located in Cologne) contacted the museum, as they thought of producing part of the film in the museum, and the museum staff arranged with me for a child that could show Go in the film. From then on, we worked in close relationship with the WDR personnel, who even visited the Cologne Go club to learn Go themselves :-) 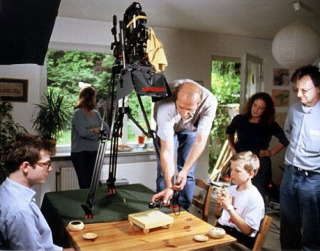 Spread Go. Make Go better known among children and their parents and teachers. Tell children that Go is an interesting game, that it is fun to play Go, that it is easy to learn Go, and that Go is a game where children have a good chance to win against adults.

To a high degree. Most people who saw the spot on TV agree that it is well designed to raise children's interest in Go. In addition, the TV spot was broadcasted in the main German TV program (ARD), where it has been seen by over one million households, and it has been replayed about ten times over the week in regional TV programs.

Go players gave assistence to the WDR in several areas: (1) We gave them an introduction on how to play Go, so that they got an idea of the game. (2) We discussed with them the film-script ("Drehbuch"). What needs to be told? What should be left out? Films for the "Sendung mit der Maus" may only last 3-7 minutes and are supposed to be understandable by children of kindergarten age! (3) We arranged with them for the child to explain Go (Florian Chamot) and arranged for playing material like Go boards and stones. (4) We supported the production of the film (e.g. recorded games, supported correct rule explanations). To have their films authentic, the WDR does not give scripts etc. to the children, but lets them explain things spontaneously. On the other hand, time and film material is limited, so that it is crucial to find the right balance between what can be left as is and what must be filmed again. (5) We advised them during cutting. Things to watch for here are e.g. that the go game is shown in correct order and that no scenes from different games are mixed up. (6) We advised them during tone production. Things to watch for here is that the Go explanations are correct and that an appropriate terminology is used. Financial resources: Euro 200, the rest was covered by the WDR.

Possibilities to copy this project

The "Sendung mit der Maus" is also broadcasted in many other European countries. Negotiations with the Westdeutscher Rundfunk and the local TV stations in the other countries will be needed to initiate broadcasting of the TV spot on Go in the other countries. Go associations should offer their assistance in the translation of the spot and should arrange the provision of local contact information to the TV station in their country.