I designed and built a Go set entirely from LEGO bricks, which can be used to play on and is so much fun for children! For the kids, there is an additional joy in the fact that they can not just play Go with this LEGO set, but that they can build it themselves from the very beginning.

I have been teaching Go to kids and adults alike for years now, during mind sport events and other big exhibitions where most of the visitors have never heard about Go before. I realised how many children love LEGO worldwide and so I decided to combine the two games, Go and LEGO. As it turns out, many kids and even adults love it and get into the mood easily, learning to play the game of Go with the LEGO GO set.

The aim or main goal of my project is to convince the LEGO Company to make a real, official LEGO set out of my working prototype. This could be a new, effective way of promoting our beloved mind sport Go to the many children all over the world who have never even heard about Go before!
From around the time when chess grandmaster Garry Kasparov had his legendary duel against the Deep Blue Chess software in 1997 (so in the last twenty years), the LEGO Company has continuously produced and sold several LEGO Chess sets. Now, after Lee Sedol 9p (in 2016) and Ke Jie 9p (in 2017) had their famous duels against DeepMind's AlphaGo, it is really the time for LEGO to produce a LEGO GO set too.

The target group is all children above 4 years of age, in every town of every country where LEGO shops exist. Additionally, this is of course an interesting initiative for all Go players and all Go assosiations around the world (EGF, AGA, IGF, etc.), who like the idea of having a LEGO GO set.

2016 - The project was designed and built for use in real life. Designed with LEGO Digital Designer software and built from real LEGO bricks with the help of a Hungarian LEGO club and printed by a small Hungarian company.

2017 - The project was presented during the European Go Congress in Oberhof, Germany. An article was published in the Deutsche Go Zeitung by the DGOB.

April 2018 - I was approached by Veronika Dimitrova, a last year's student of Package-Design Engineering in Budapest. She tried out LEGO GO during a Japan-releated convention and liked it so much that she decided to ask me if she can design a non-official fullscale packaging box for the set. Designing the box will be her diploma project.

Every now and then the LEGO GO protoype was used by hundreds of visitors, during many Japan-related exhibitions, mind sport events and LEGO shows in Hungary. 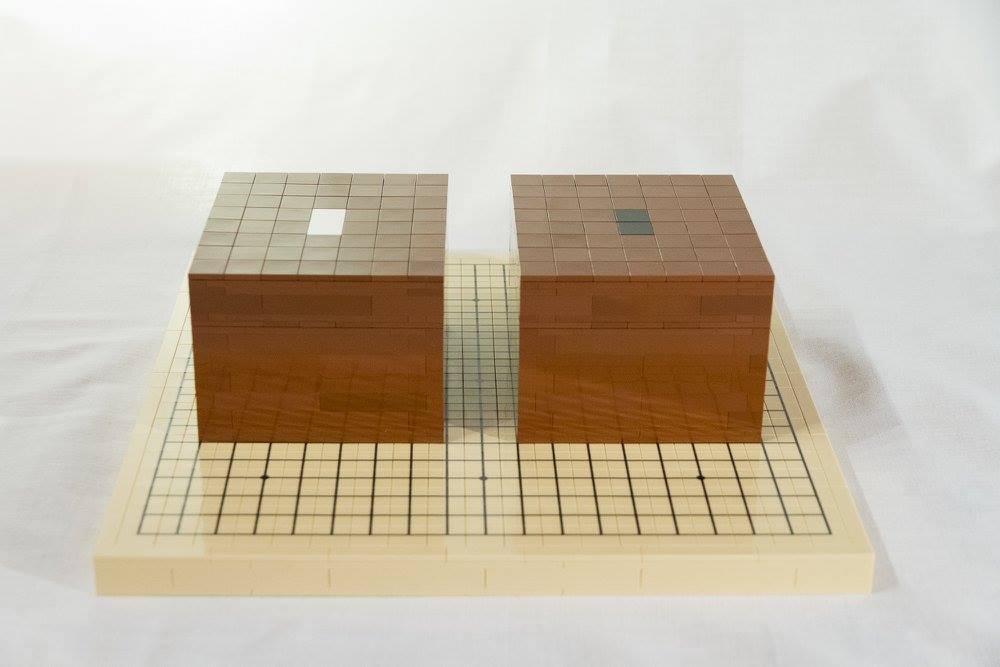 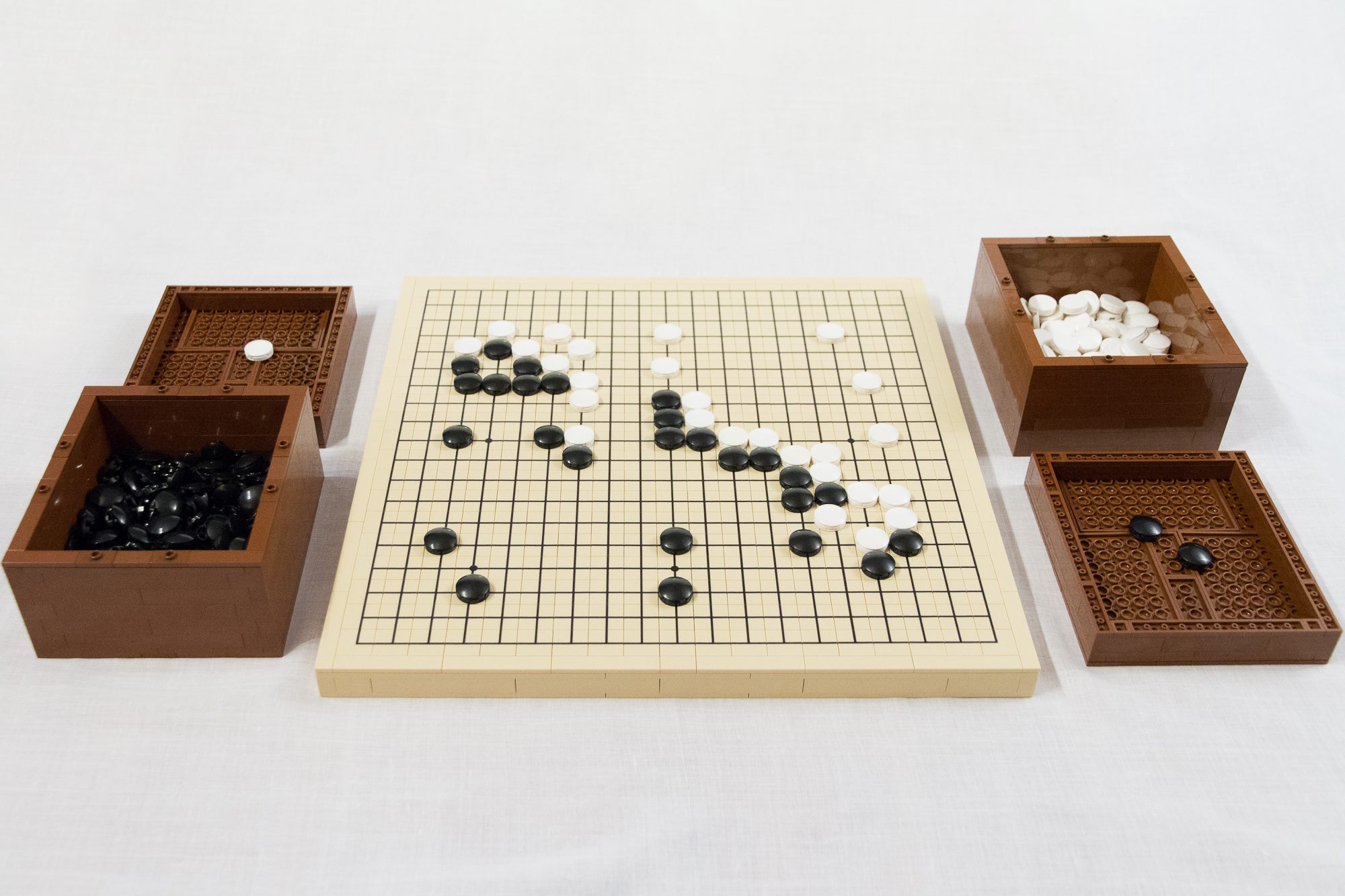 The LEGO GO set in use 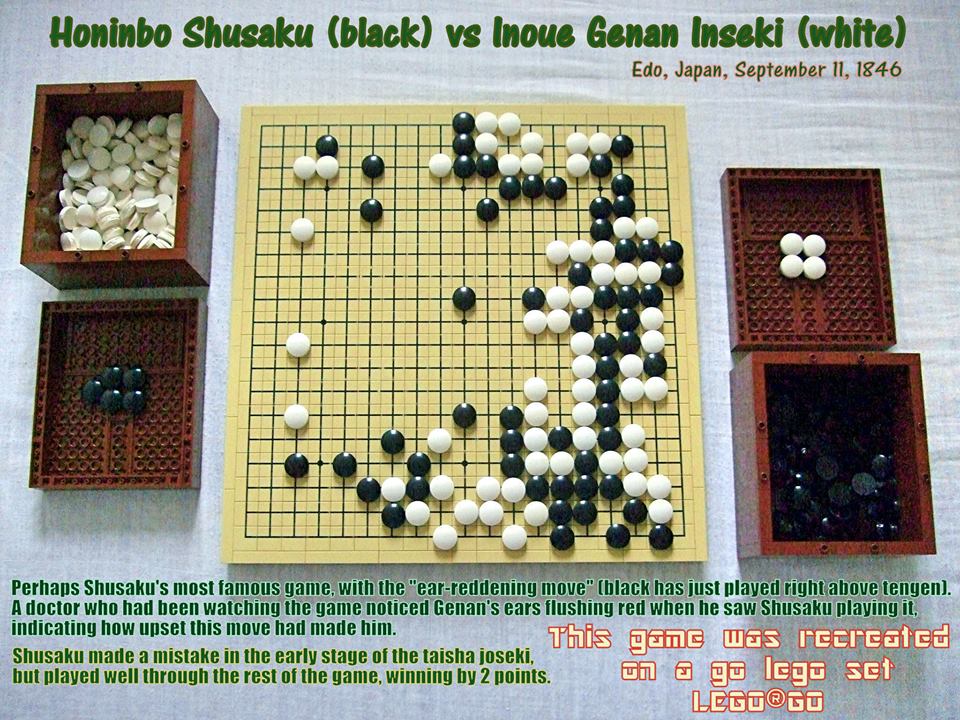 The ear reddening move by Shusaku 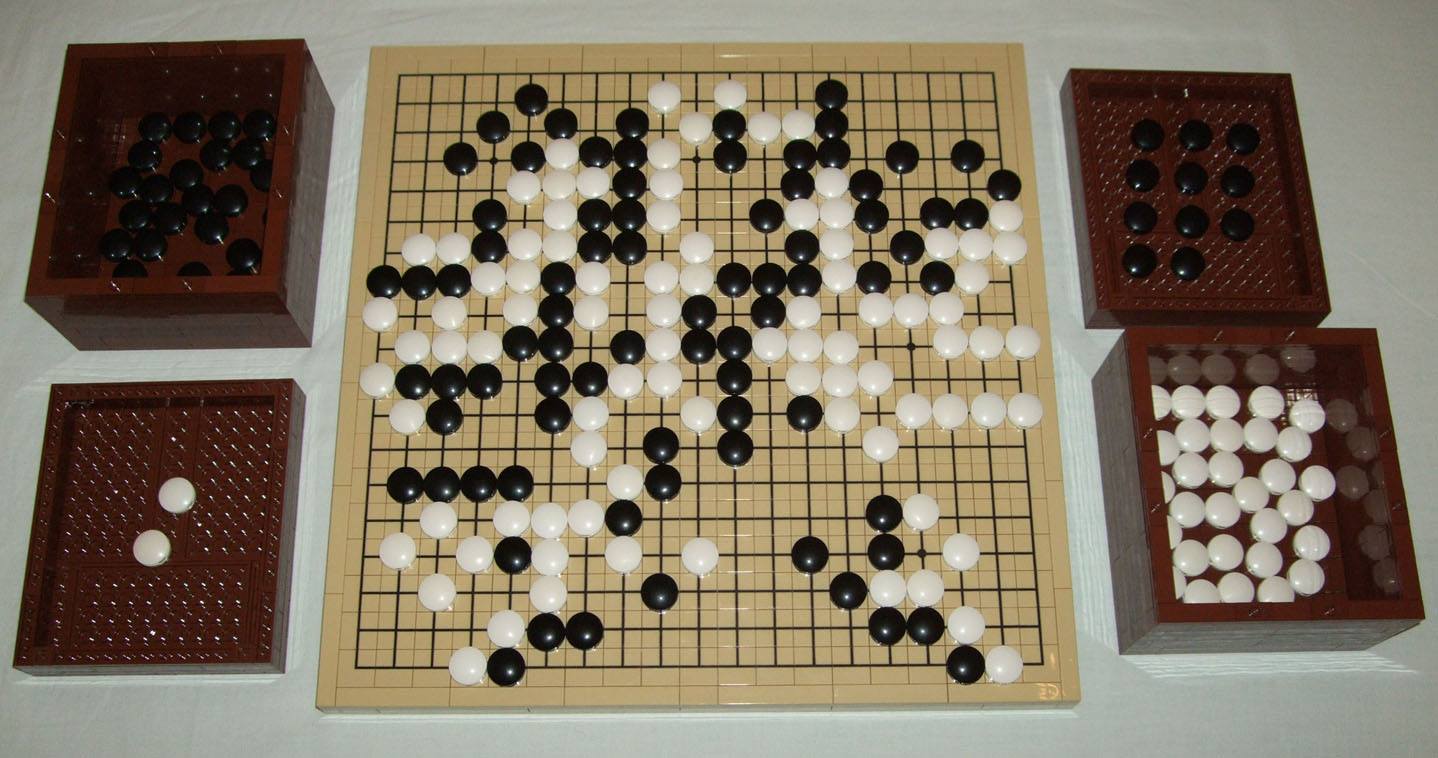 The 4th match between Lee Sedol and AlphaGo, the game of the century 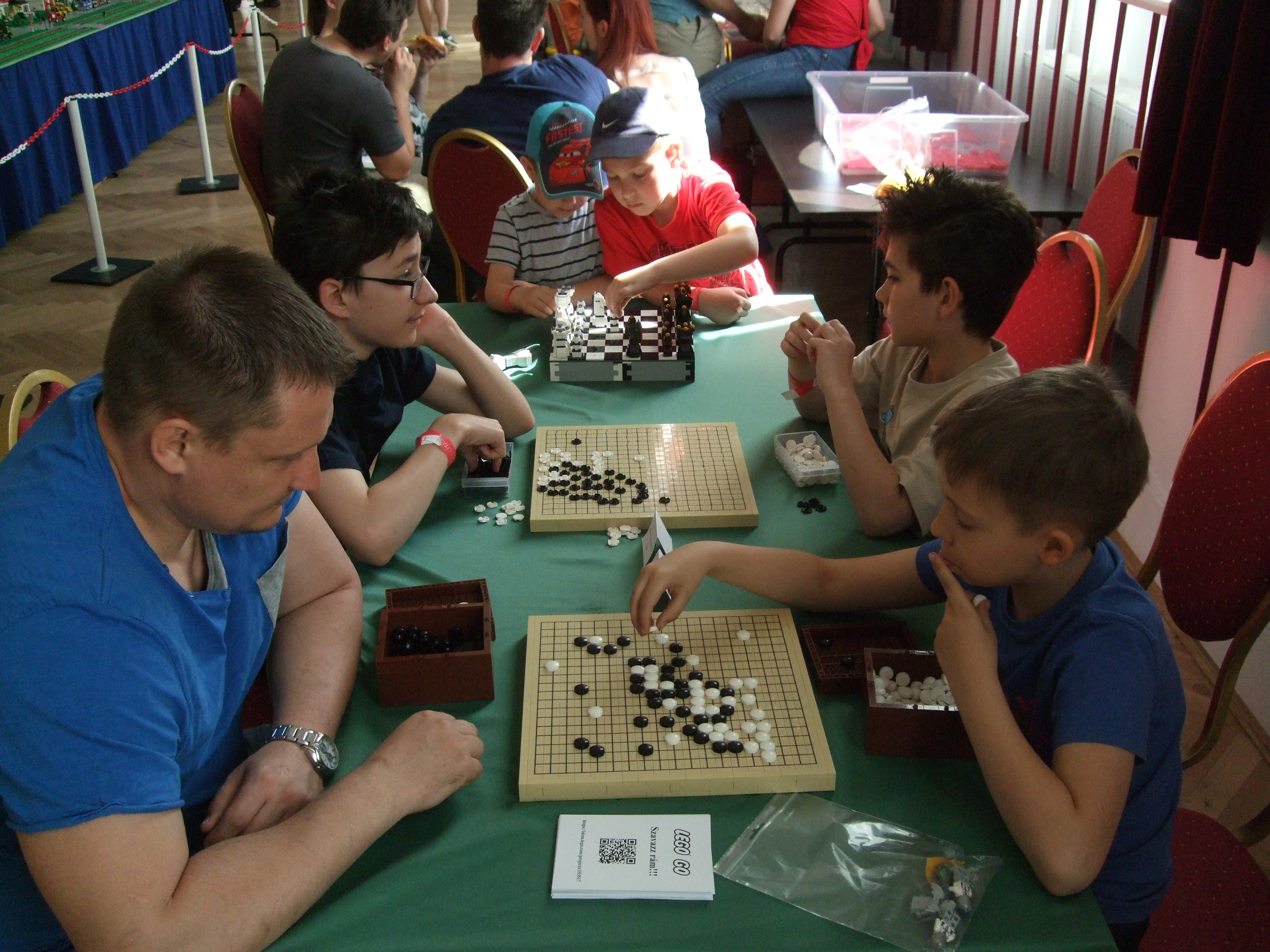 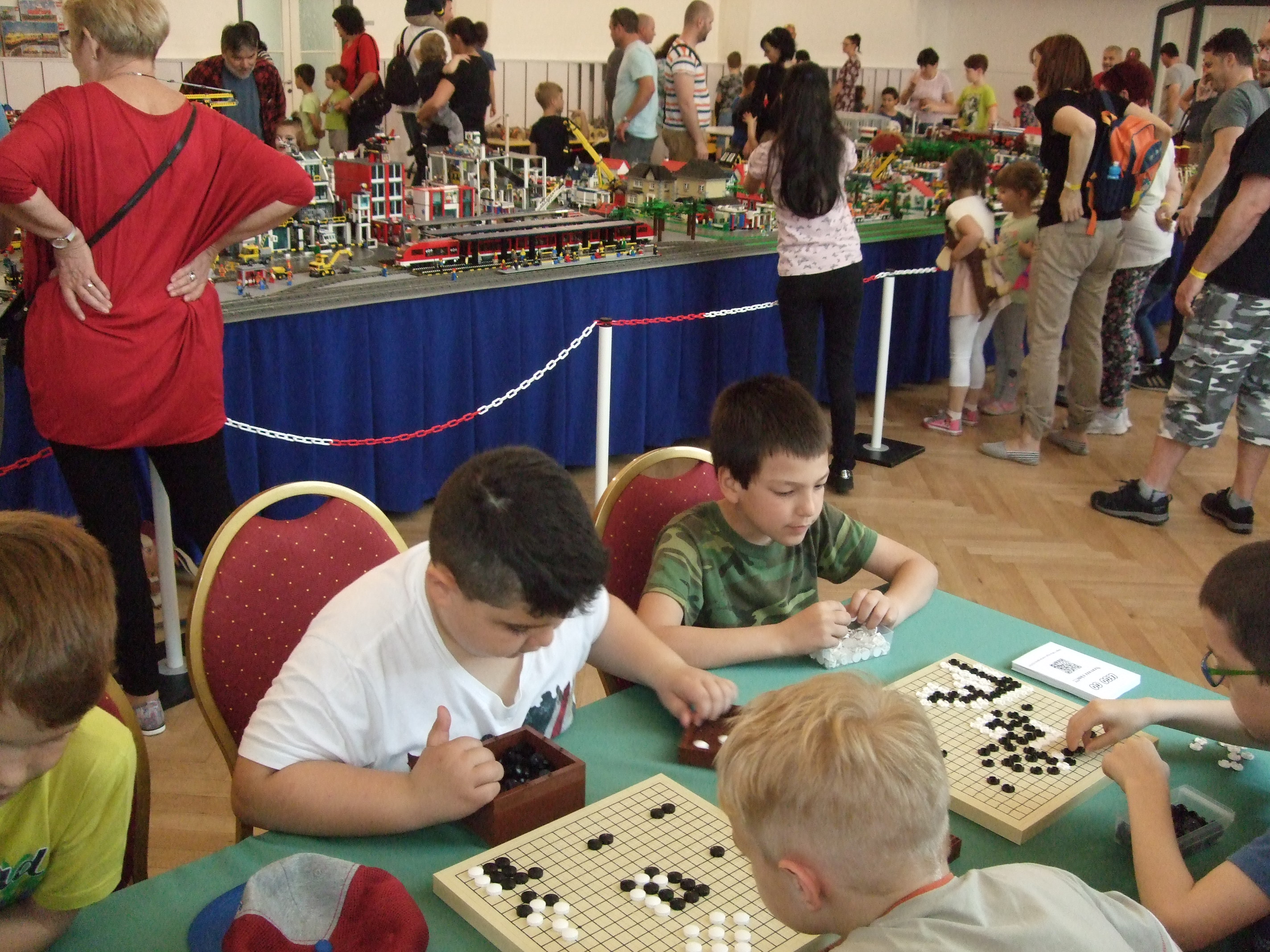 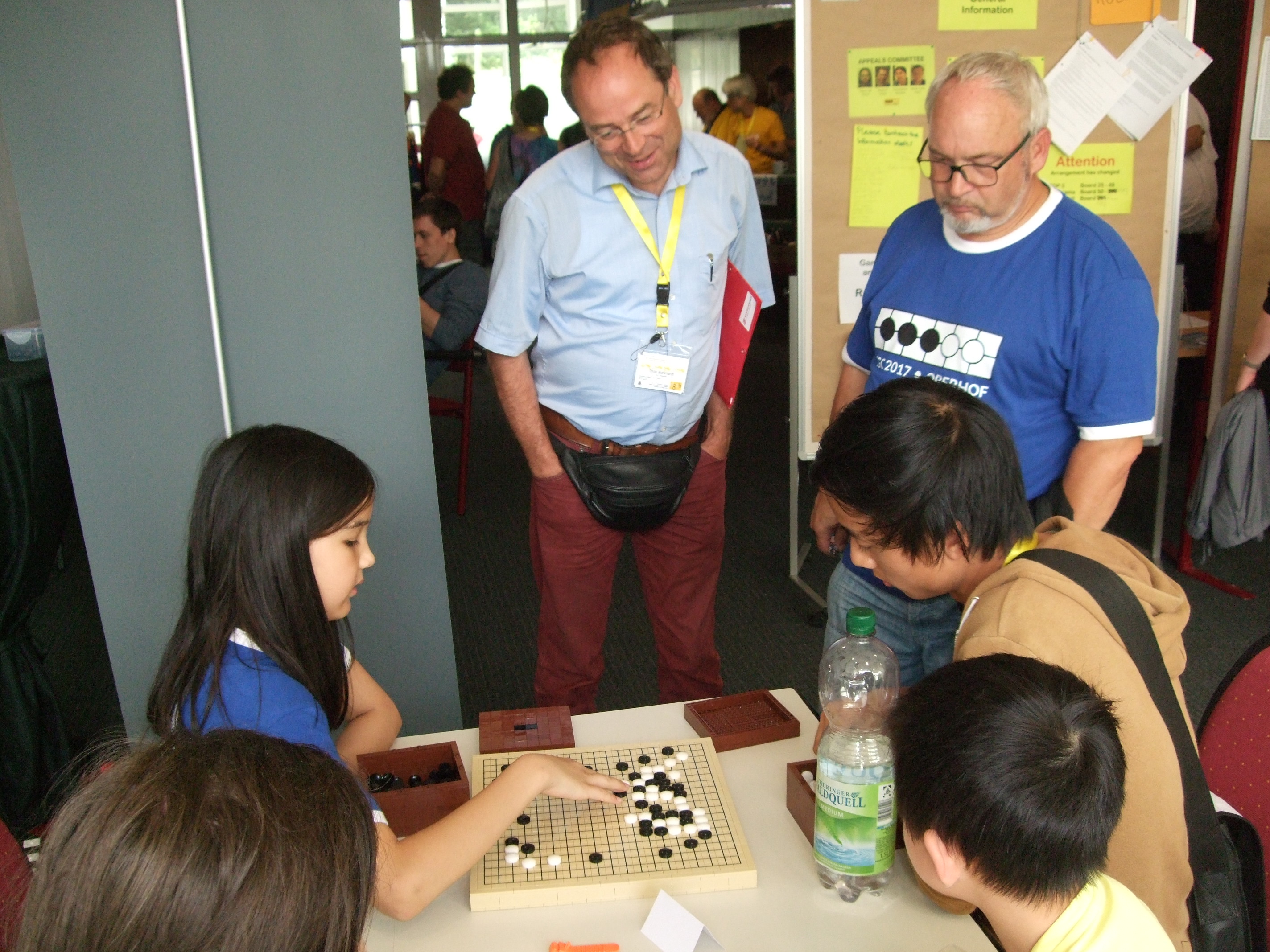 If we could convince the LEGO Company, the result would be that every child over 4 years of age, in every country where LEGO stores and toy stores exist, will be able to get in touch with Go. Through the LEGO GO set, children everywhere can learn about the game and start to love our precious mind sport much more than we could entice them through ordinary Go sets. Every household, school, even all Go associations could use the LEGO GO set for promotion (the AGA and EGF already indicated that they want at least one for sure). It is important to clarify that LEGO GO does not aim to replace traditional wooden Go sets! LEGO GO could simply be the Go equivalent of the official LEGO Chess sets that already exist, for both children and adults.
LEGO GO will effectively bring Go to the attention of those many-many children who have not heard about it before. At first, kids start to like Go because they know LEGO, and after learning the game they satrt to love it for itself, the great game that it is. During my teaching in conventions I heard many children ask and urge their parents to buy one for them, and after we played (I let them win) they wanted to play more and more games of Go.

, Stud.io, Photoshop Lightroom, Coreldraw, real/physical LEGO bricks, special printer for the black lines on the surface of the LEGO bricks.

Me and my friends. The owner of the Hungarian LEGO Club and his co-workers, the former ambassador of LEGO in the Middle European region, the owner of the small Hungarian printing company, and a professional photographer. They all spent hours of their time to help me and provided me with their advice and/or services. In the last two years, I spent an uncountable amount of days teaching Go through the LEGO GO prototype, set up during different conventions.
Several Go players and/or LEGO fan friends helped me by liking and spreading the word about my project on Facebook.

There were almost none. I was lucky enough that I could create my project with little money. Afterwards I mearly spent about €40-50. All my friends helped me for free. I could enter and promote LEGO GO during conventions, by theaching Go with it for free. I used free softwares to design it. The most I paid was for the hotel room in Oberhof during the EGC. I have not received any sponsorships.

During the last two years, hundreds of children and adults had the chance to try out the LEGO GO project and learn to play Go with it in different conventions, exhibitions, school events in Hungary, and once in Germany during the 2017 EGC in Oberhof.

The Deutscher Go-Bund wrote about LEGO GO in their magazine and the AGA and the EGF published articles about it on their website.

The LEGO GO project has a Facebook page.
Please also have a look at two YouTube videos that were made to showcase the project:

My greatest expectation is that the LEGO Company will accept and produce the LEGO GO set, so eventually many children will be able to know about it, have it in their homes and learn about Go. Hopefully more and more children would turn to becoming professional Go players.

My whishes are to get in contact with the leaders of the:
Nihon Kiin, IGF (International Go Federation), EGF (European Go Federation), Dansk Go Ferbund (Danish Go Association) and IMSA (International Mind Sport Association).
Together we can request a visit and meeting with the decision-makers of the LEGO Company to discuss the idea of a LEGO GO set.

Many Hungarian and foreign Go players, like Diána Kőszegi 1p, assured me that my LEGO GO project is a very good idea and that it needs to be pursued. All the kids I played Go with through the LEGO GO prototype were enthusiastic and wanted to play more.

More info can be downloaded here. 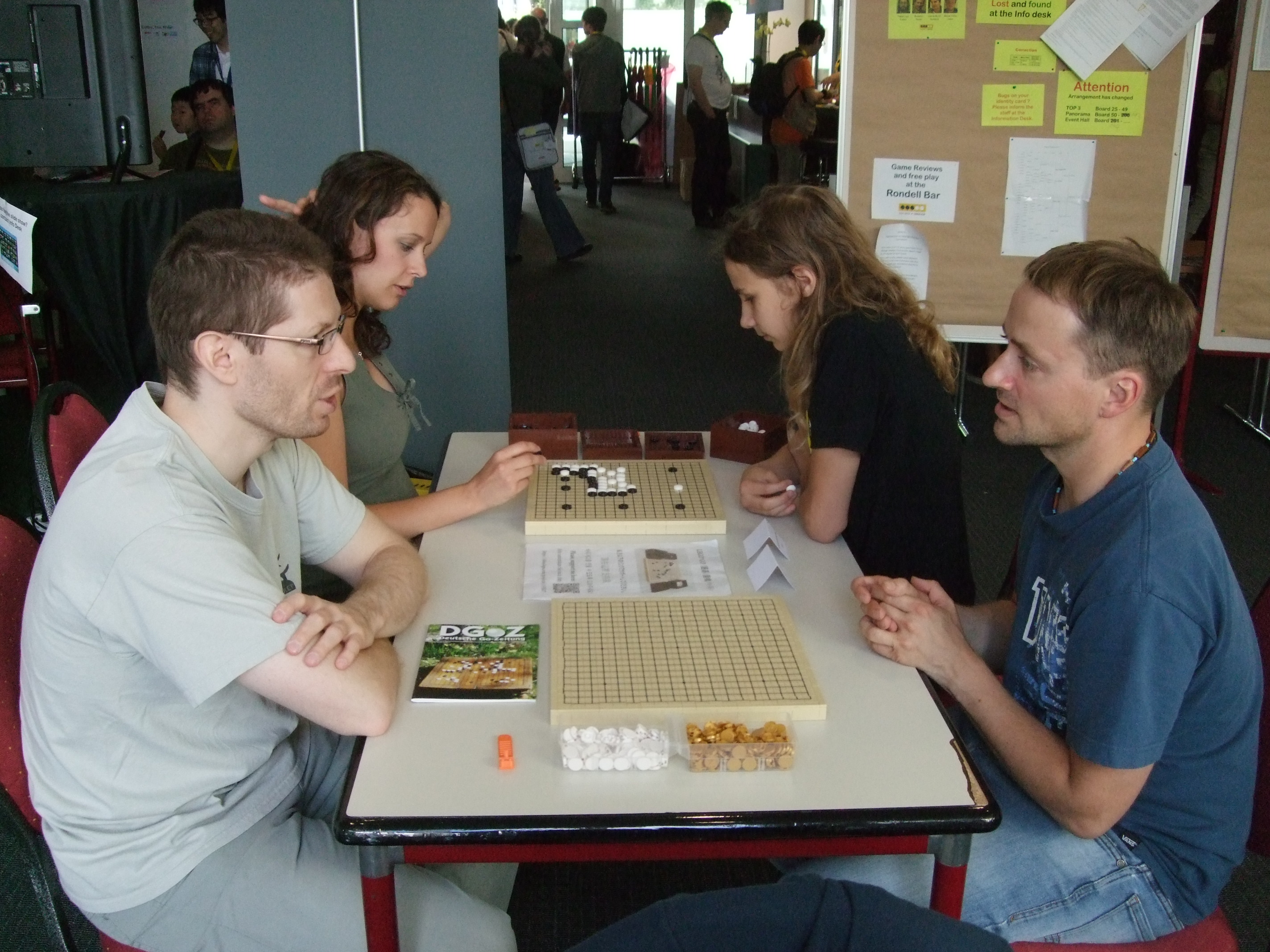 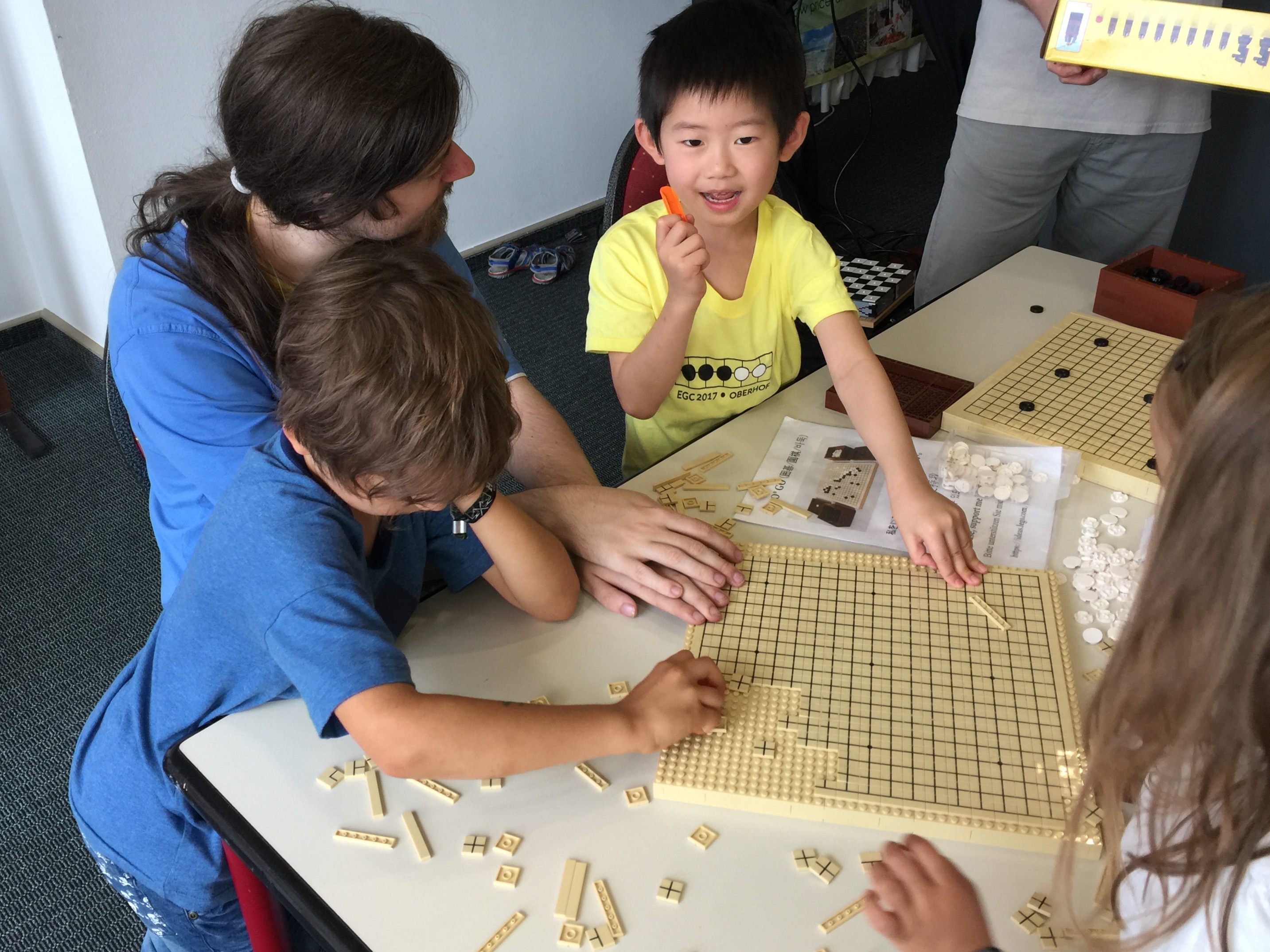 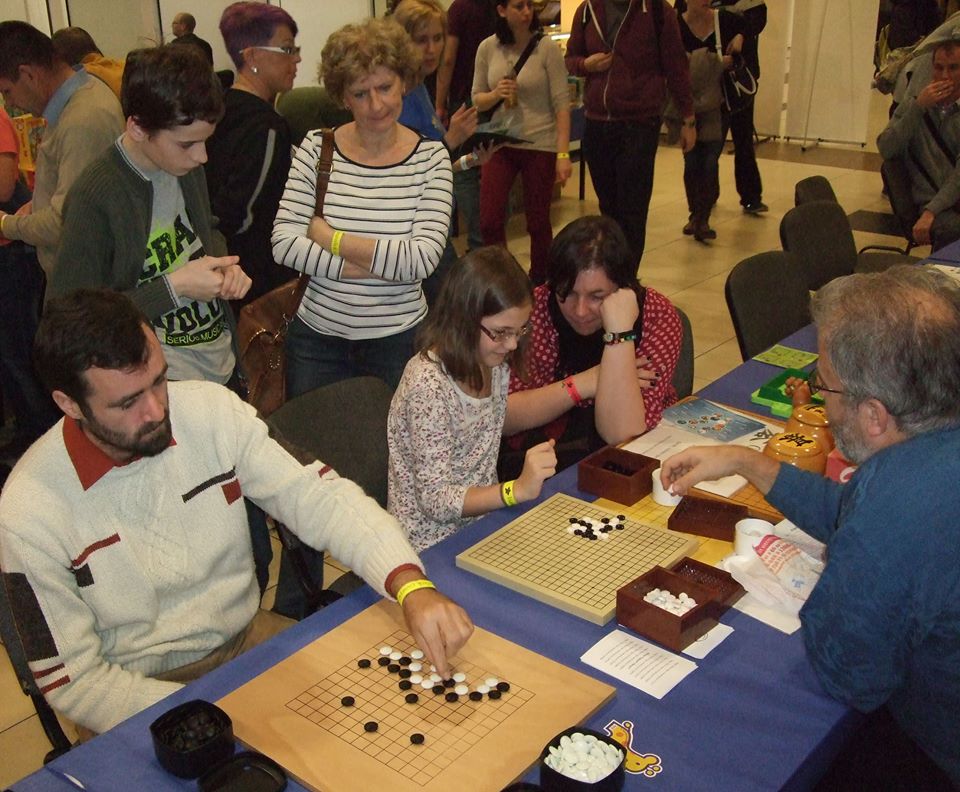 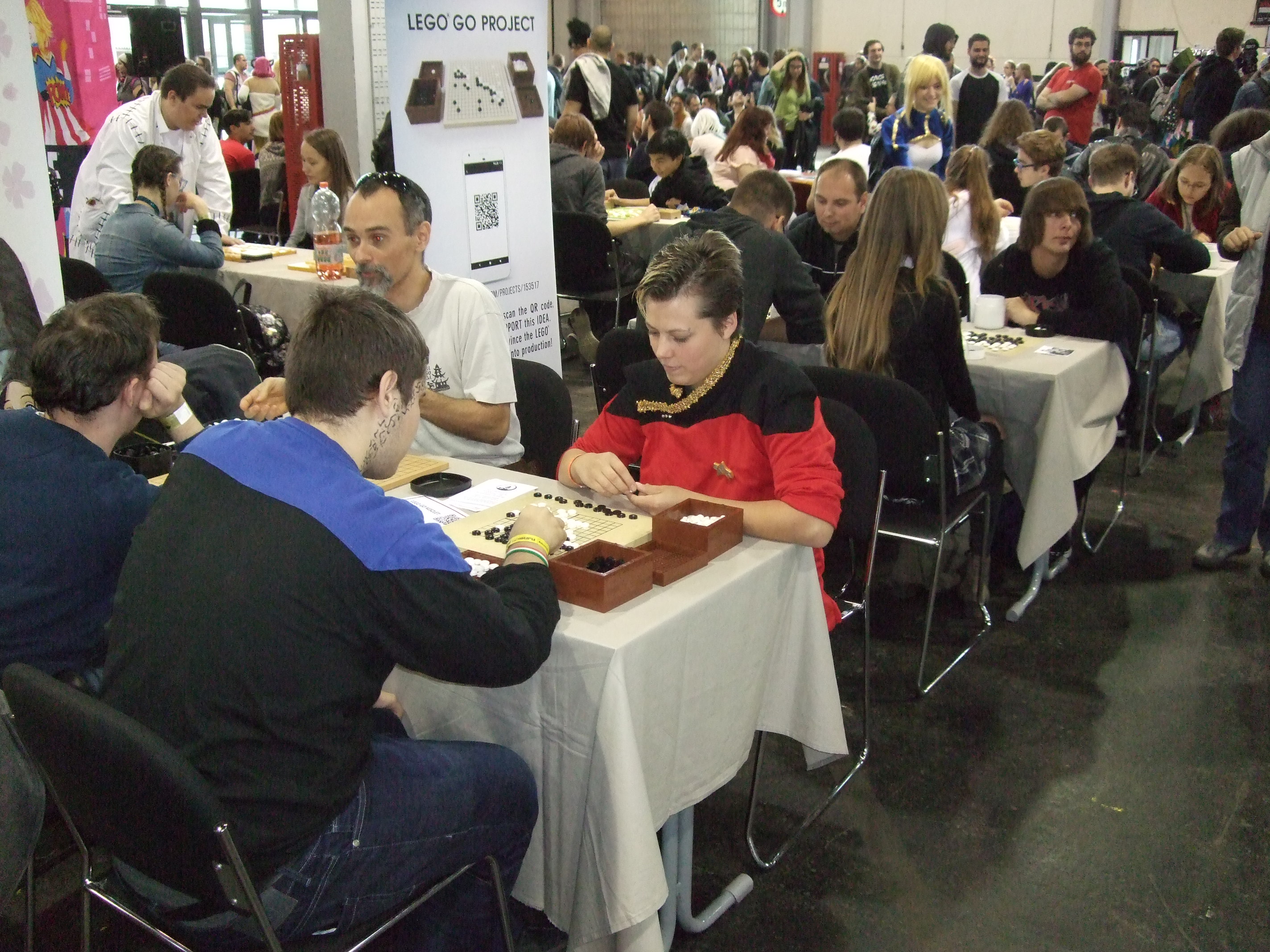 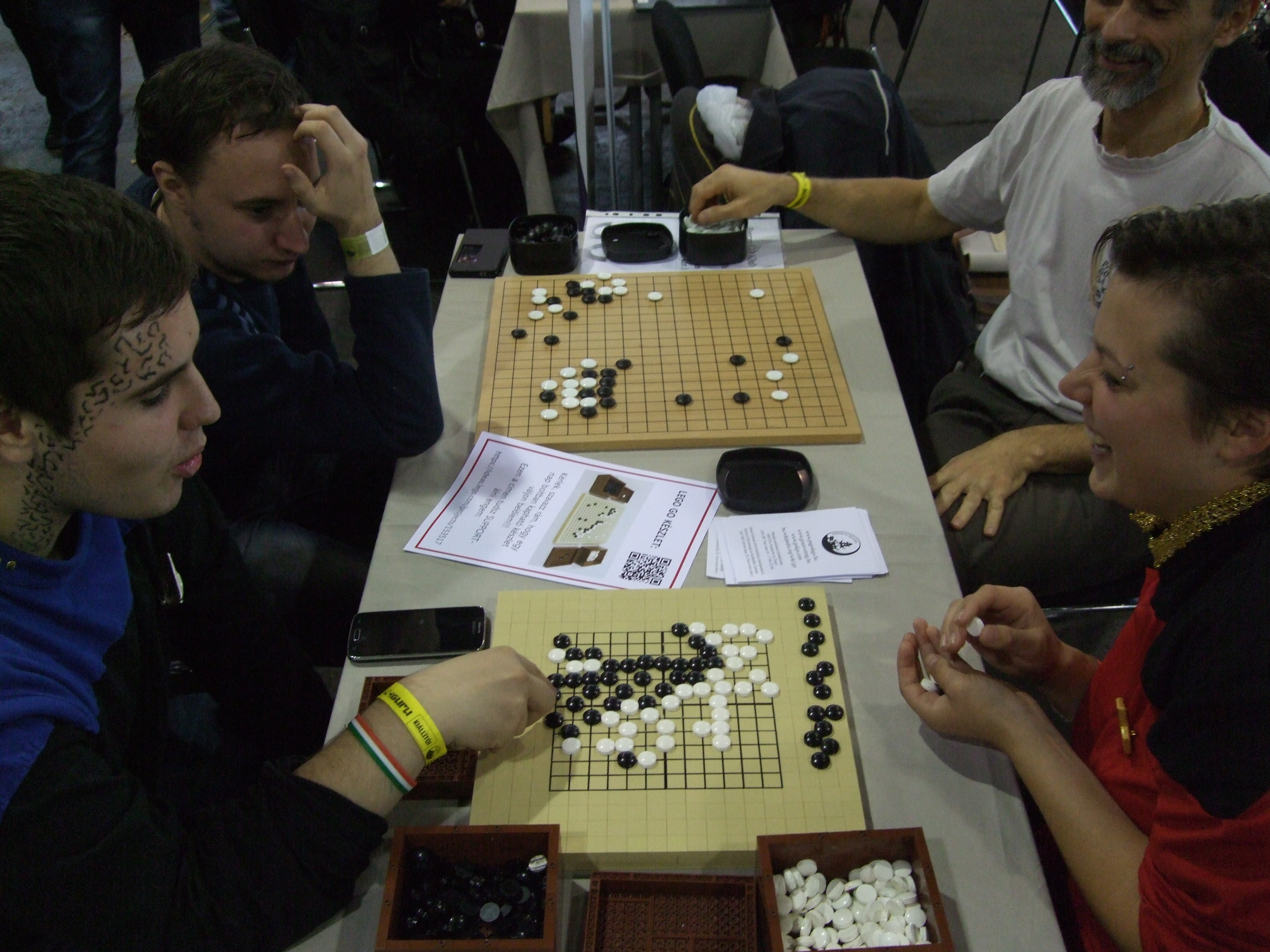 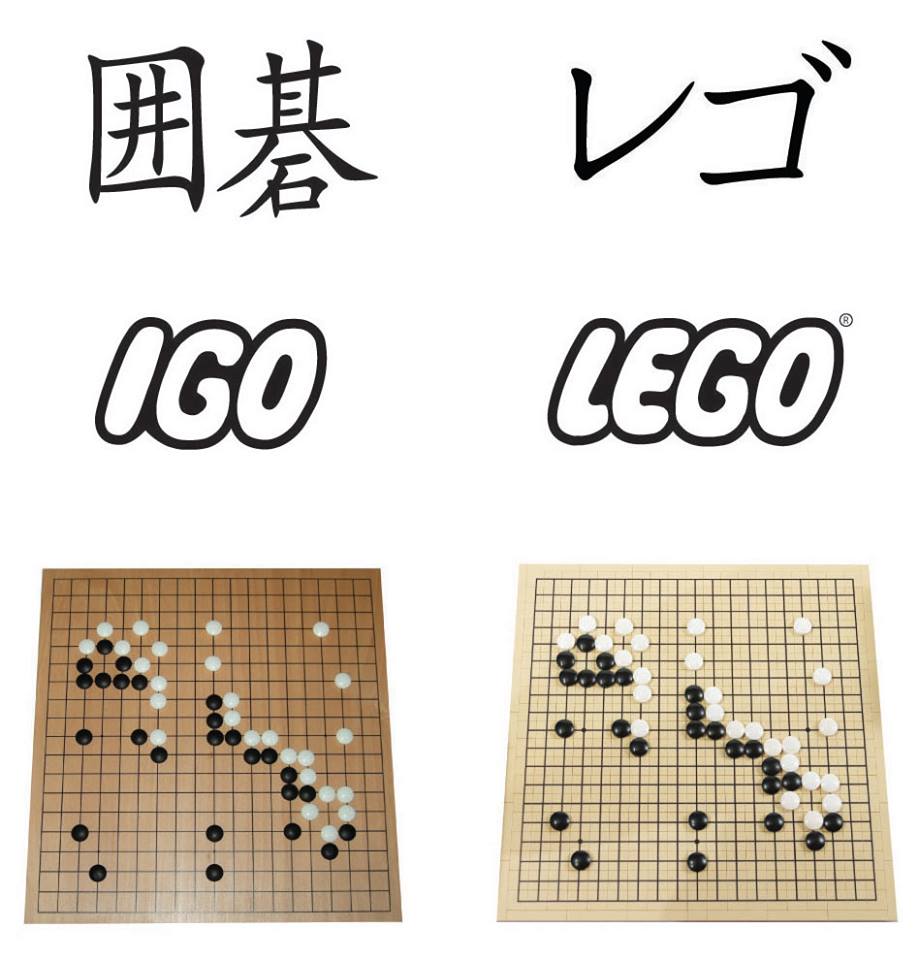 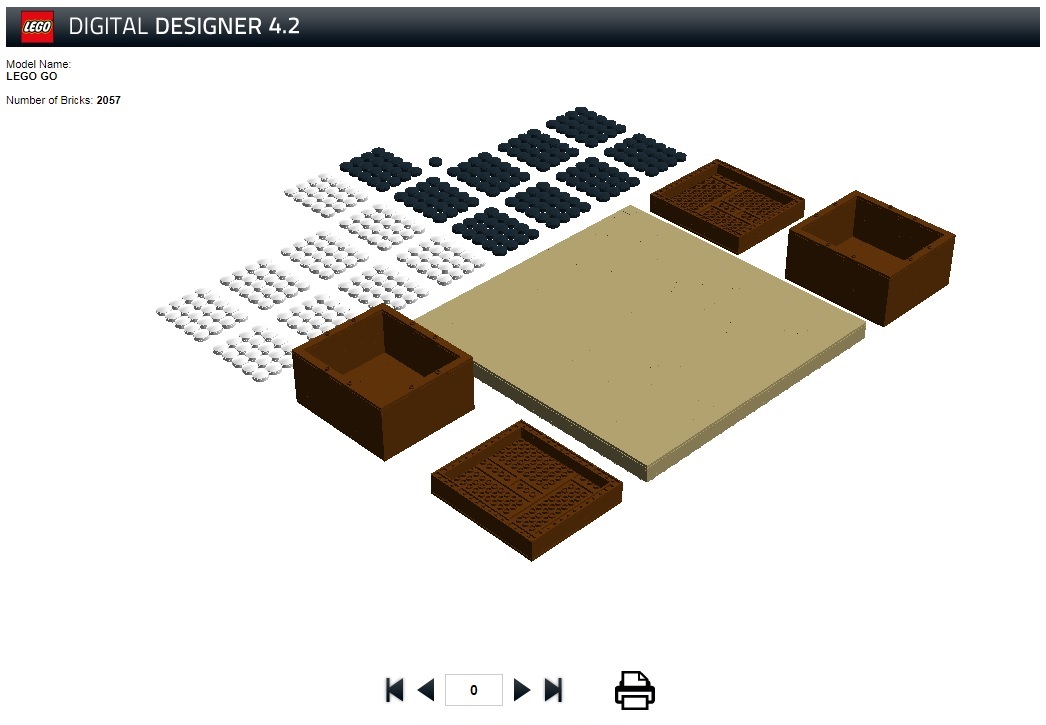 Screenshot of the design