In Germany, like in many other countries, we experience the problem that children who learn Go get bored at some point, when they no longer have other children to play with who are on a similar Go level. Playing with adults is often not an alternative for the kids: it is not as fun and the adults are often still too strong for them.
Outside of East Asia, the density of Go playing kids is very low. The nearest child of the same level might be living a few hours by car away.
Another problem is that many kids do not have a Go teacher in their town, making it hard for them to become stronger. Finally, parental support is scarce, since parents of talented children often don't know about Go and thus do not notice their kids' talent for it.
For these reasons, most promising kids stop playing Go sooner or later. This is a severe problem, since the total number of active Go players in Germany is relatively small and we really need new players.
To overcome these problems, five years ago we started a project in Germany, meant to help young players get in touch with other kids who want to play and provide them with support to learn Go. The key idea was to introduce a Youth League and a National Youth Team, both taking place online. 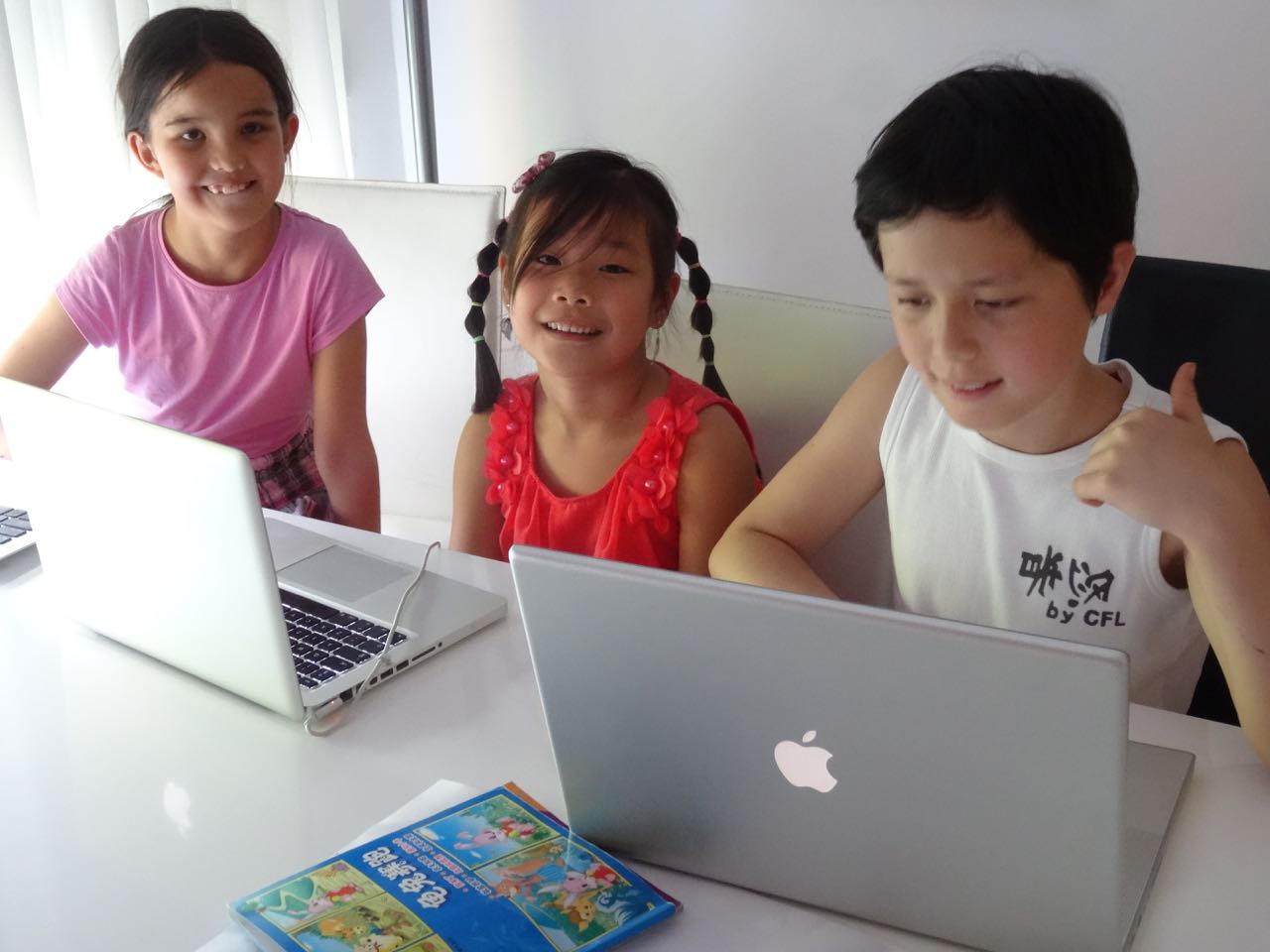 Playing online can be fun! 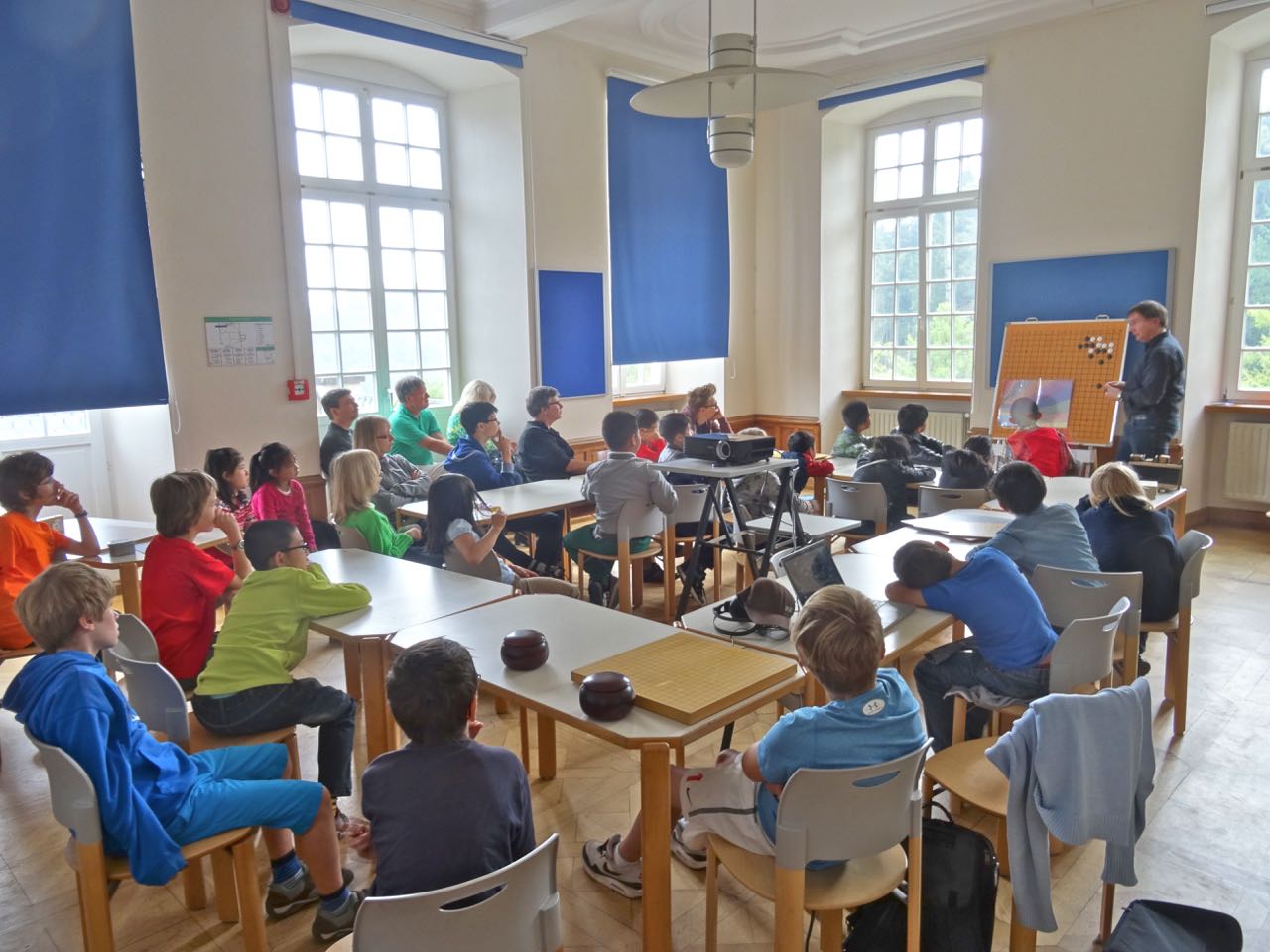 A meeting of the German Youth League 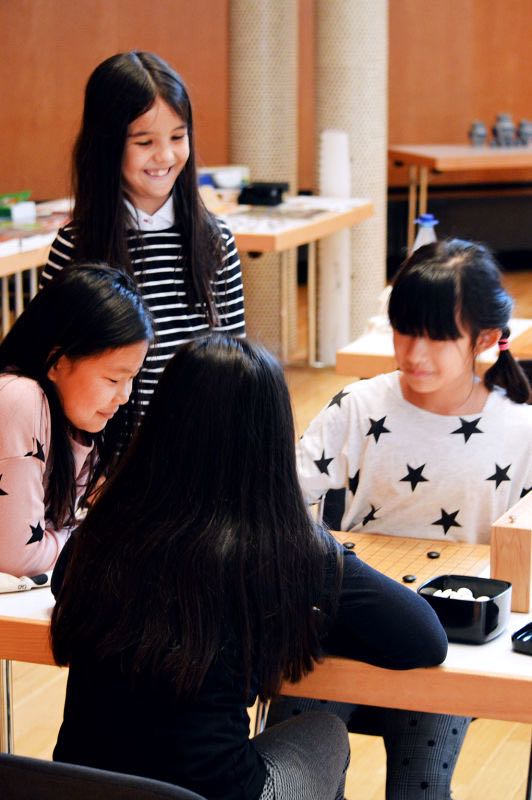 Bringing the German Go youth together

Our target group was all talented kids in Germany (and some neighbouring countries). The project was meant to solve all the problems mentioned above.

Moreover, we organised regular meetings (at least once a year) for all kids, so quite soon the children became friends and a community started to form that made it much more attractive for the kids to also participate at other Go events: many of them were now looking forward to meet their friends at regular Go tournaments (where most participants are adults), so the general participation of children in Go events also increased.

In conclusion, the aims that we had with this project are by now successfully reached.

Our main long-term goals were:

These goals were so far reached very well: 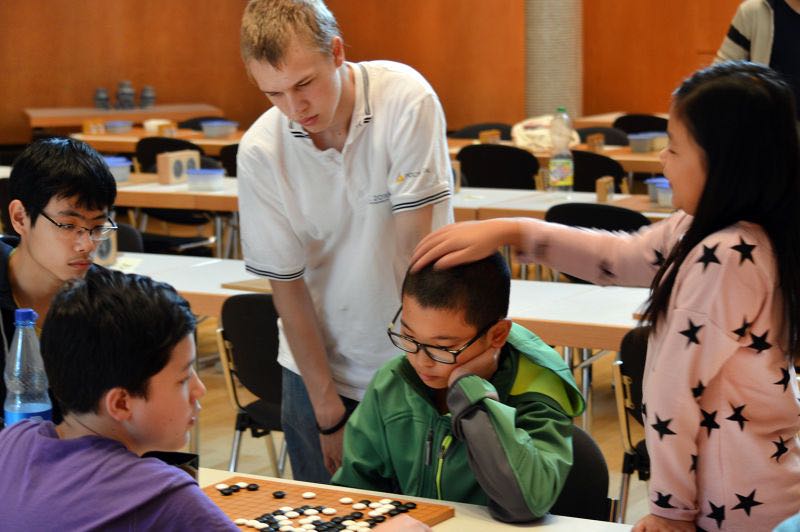 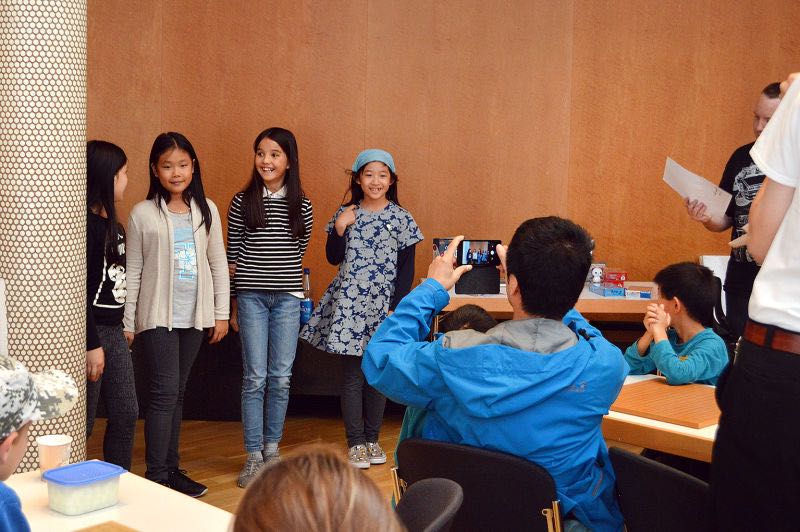 Fun at a Go meeting

Internet and at Go tournaments.

May 2013 – The concept "Go Future" is drafted (by Marc). It entails several ideas on how to organise the promotion of young Go players in Germany, in particular the Youth League, an idea (in a slightly different form) going back to Viktor Lin, and National Youth Teams.

September 2013 – Inviting children that qualified (based on their playing strength and age) for the first season of the Youth League.

December 7th, 2013 – Start of the first season of the Youth League with 28 players. The Youth League is organised by Ferdinand and Marc. Also kids from Luxembourg and later Switzerland participate. Games of the kids are regularly reviewed by top German amateurs and sometimes professionals.

September 2014 – Meeting of the Youth League players in Luxembourg.

November 2014 – Start of the first European Youth Team Championship, which is held annually ever since (Marc is one of its two programme managers).

February 2015 – Meeting of the Youth League players in Bonn.

March 23rd, 2015 – Start of the EGF Academy, organised by Viktor Lin, which followed the successful model of the Youth League and elevated it to a European level.

August 2015 – Meeting of the Youth League players at the European Go Congress in Liberec.

October 2016 – Meeting of the Youth League players in Frankfurt.

July 2017 – Meeting of the Youth League players at the European Go Congress in Oberhof.

April 7th, 2018 – A first German Girls League takes place on the Internet, as a special event.

In total, more than 100 kids participated in the Youth League since its inception, and more than 1000 games have been played. The 14th season will start at the end of April. 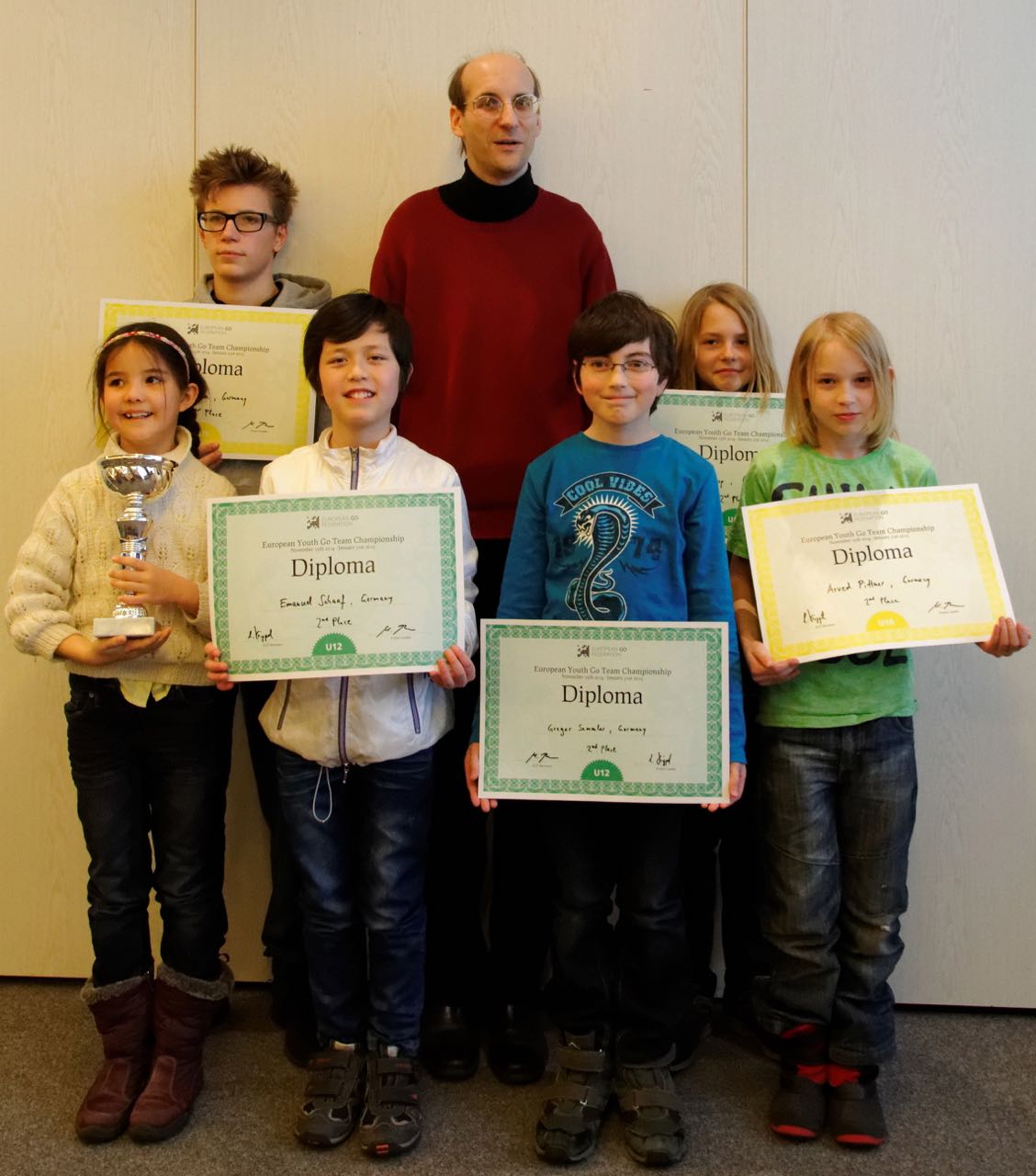 Our happy team after the European Championship. 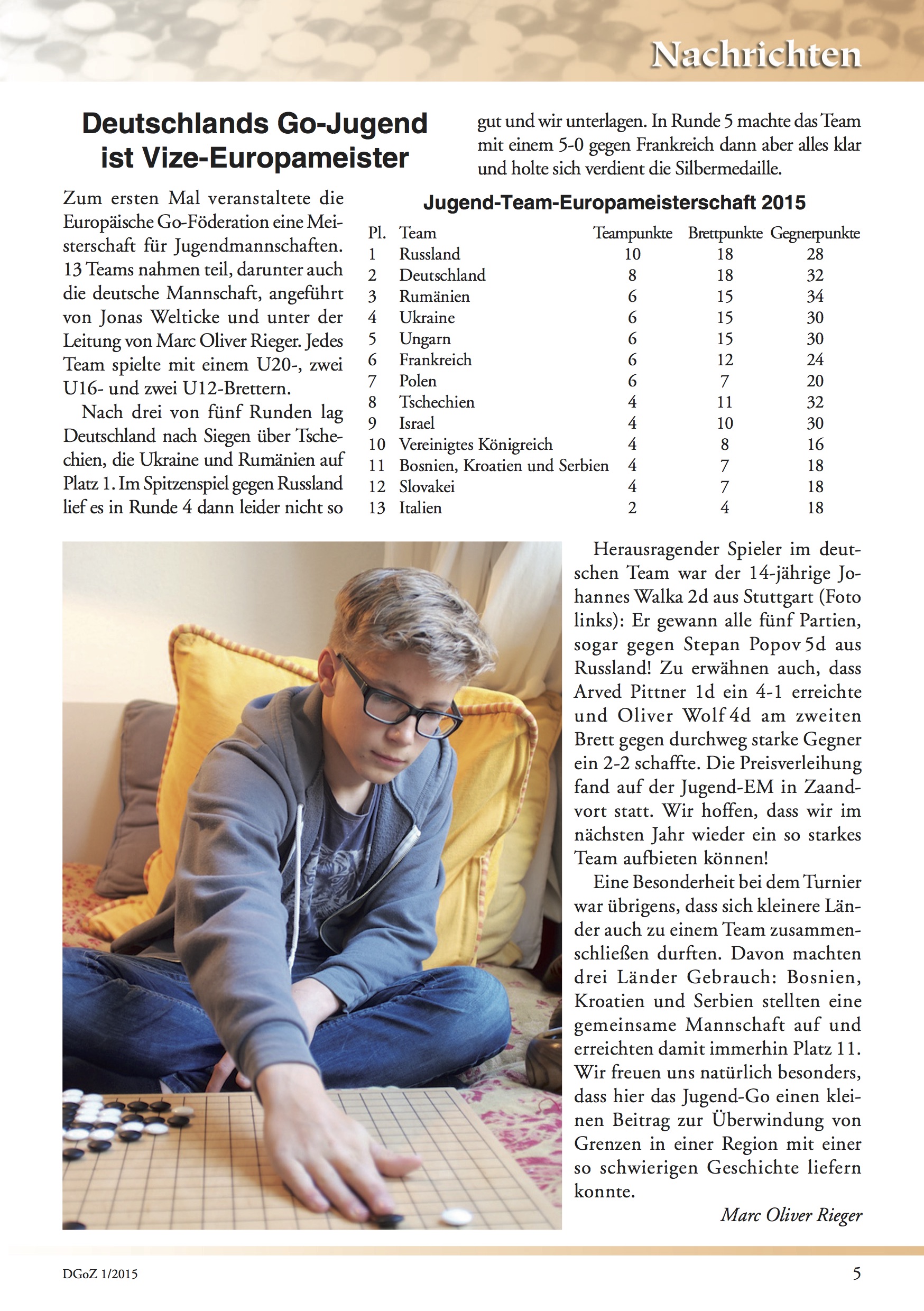 Article about the National Youth Team in the German Go Magazine. 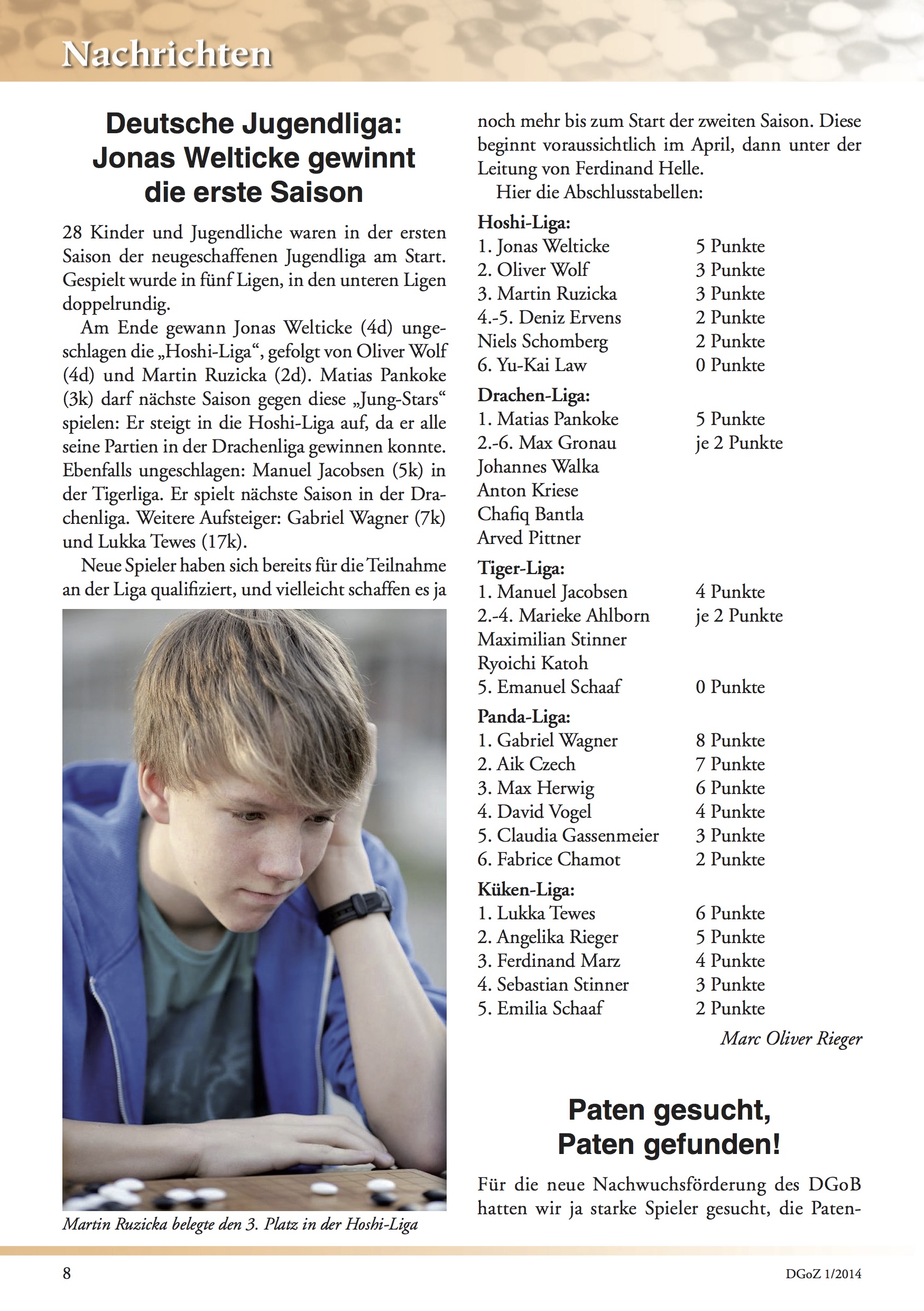 Article on the Youth League in the German Go Magazine. 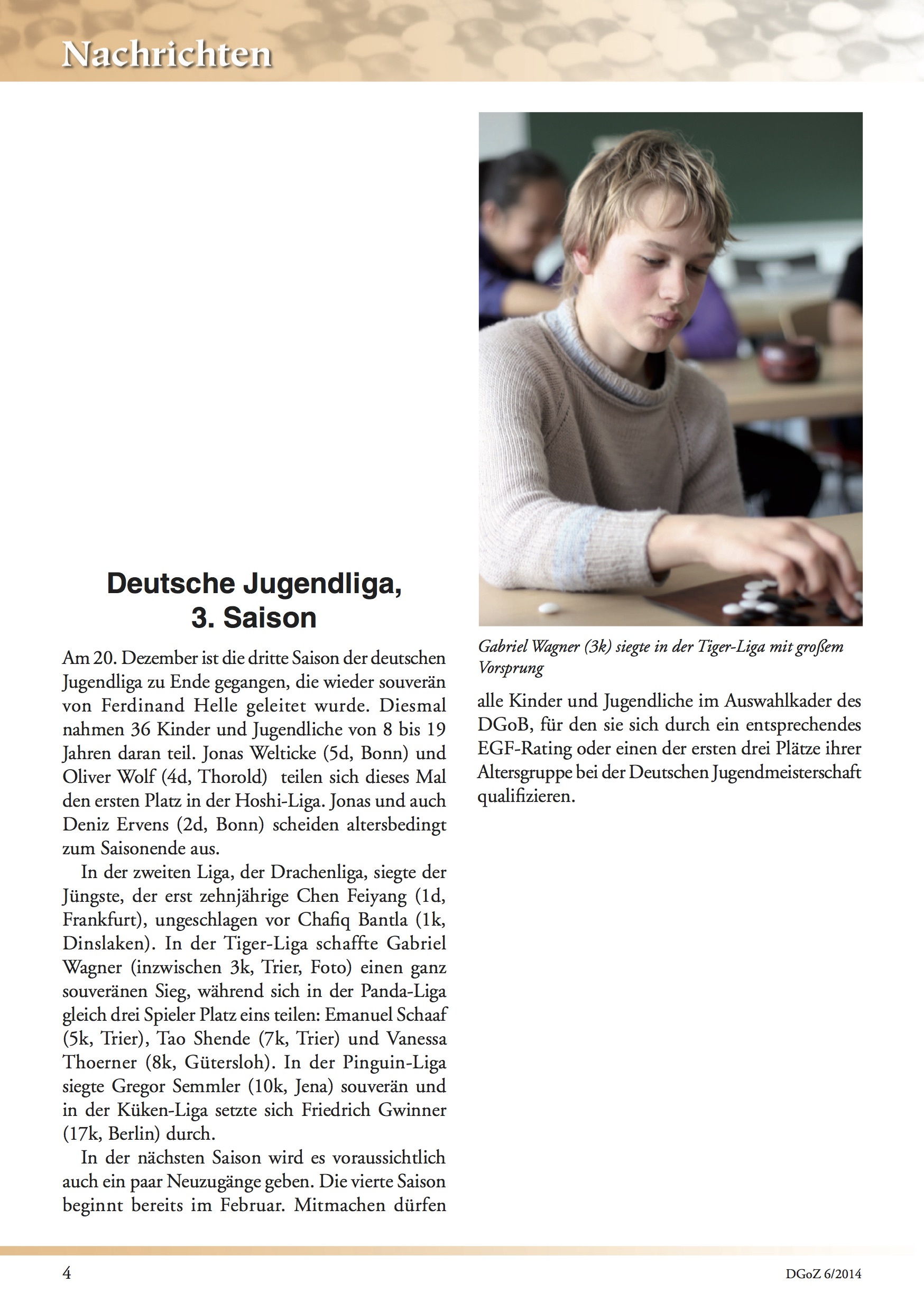 Another article in the German Go Magazine.

– Local meetings have to be organised, but are part of larger tournaments, so the overall time expenditure is difficult to separate.

The German Go Association supports all youth activities with around 2000€ per year. The budget for the Youth League and the National Youth Team is only a portion of this and consists mainly of payments for game reviews (ca. 500€ per year).

We would like to point out that in countries with a smaller budget the core ideas of the project can be implemented as well. This is not a big money project, but one that is successful mostly because it combines the efforts of people in the Go community in an efficient way.

The Youth League lead to numerous articles in the German Go Newspaper (DGoZ) and on the web, giving the kids the fame they deserve and thus motivating other children to become strong enough to join the Youth League.
Competitions where the National Youth Team took part lead to newspaper articles and online reports. 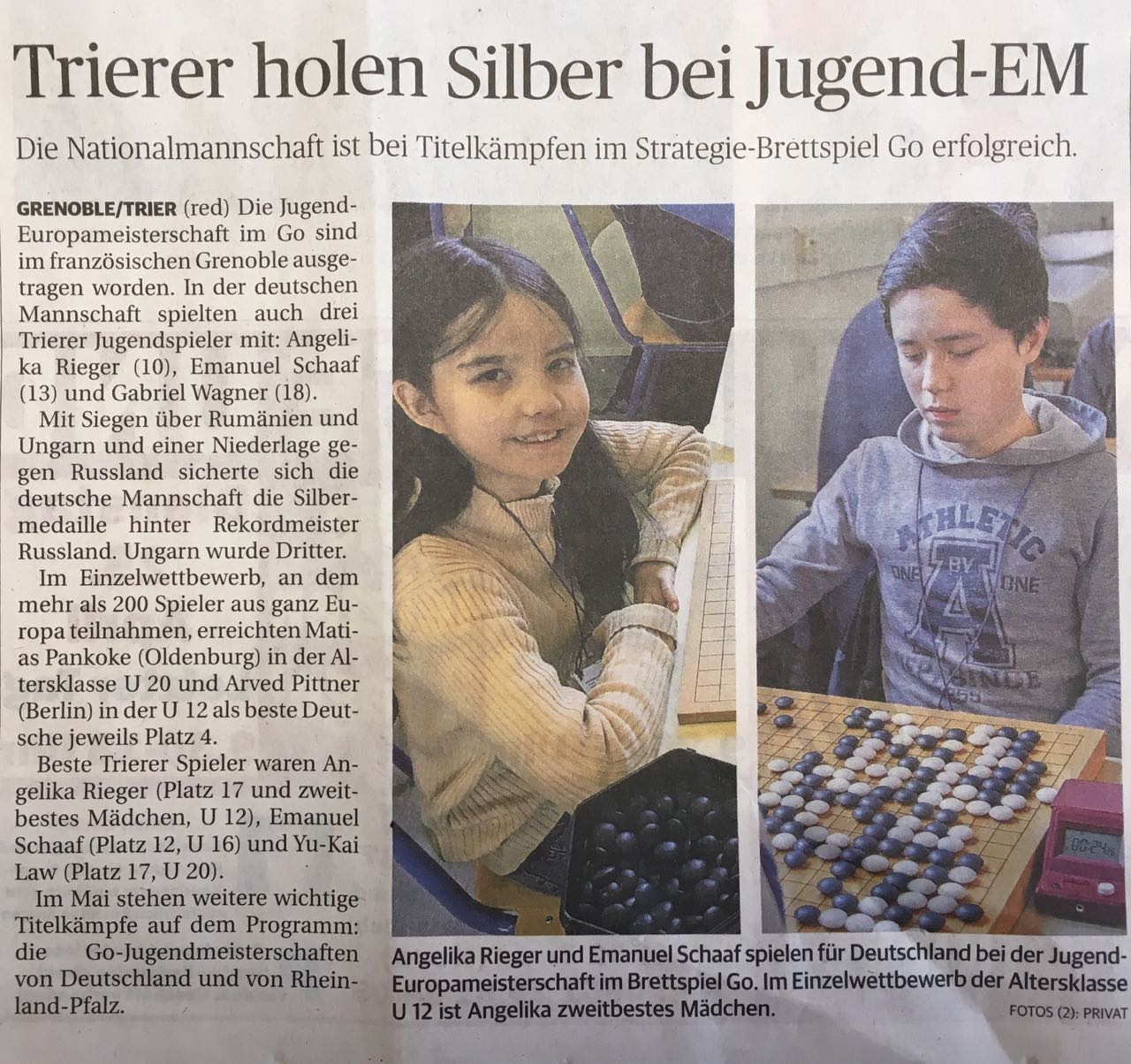 Daily newspapers reported about the results of the National Youth Team.

We see a constant increase in the number of participants and will continue this successful project. 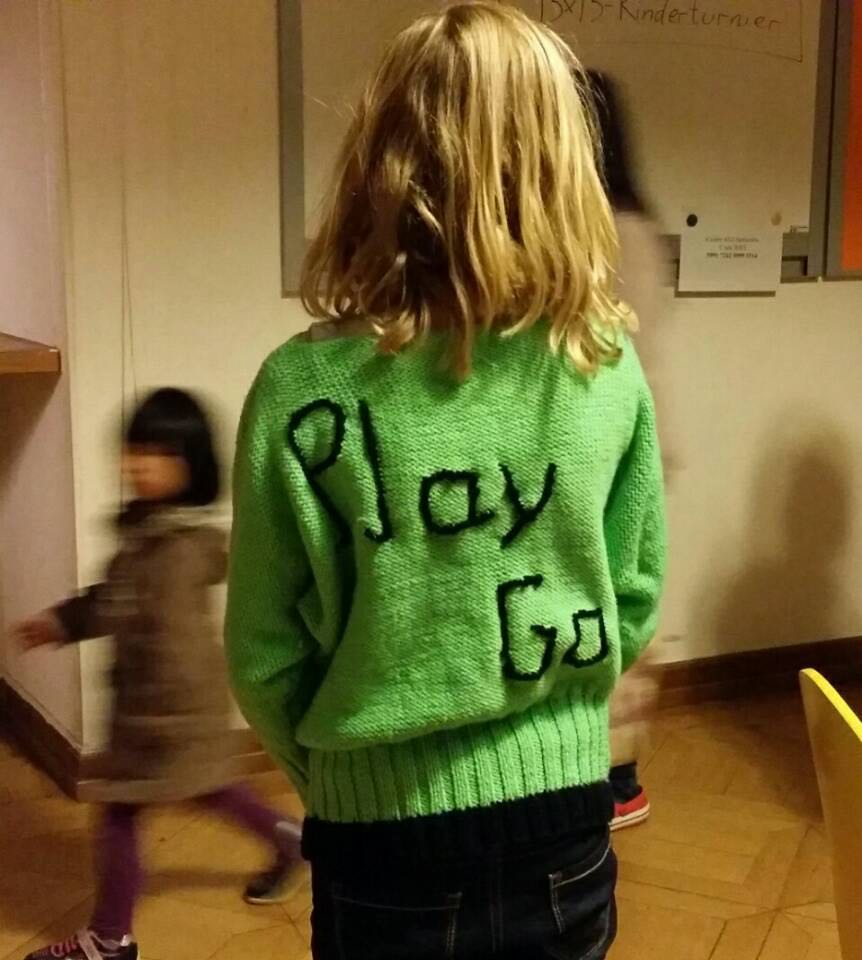 A bright future of Go in Germany ahead!