Go in Australia has not grown for decades, membership has hovered around 350 for many years.  We know there are players in the community, but have been unable to engage with them or encourage them to start clubs or register with the AGA. This is not atypical behaviour for Go clubs around the world but it takes on a whole new meaning when mapped across the expanse of Australia. To put distances in perspective – London to Moscow is the same as Sydney to Perth and while the distances between other major cities is less, they are significant.  Also, travel across a city such as Sydney or Melbourne can take 60 to 90 minutes – and that’s on a good day.

The true nature of the problem was clearly brought to light in a survey of members in 2017.  The key problems the respondents identified were ‘not enough players in my area’, ‘no AGA club near where I live or work’, ‘not enough time to play’, ‘hard to find a teacher’ and ‘hard to improve’.

The Australian Go Association like all amateur associations around the world cannot wave a magic wand and set up clubs across the country, make people want to play, visit their club/home to teach them or give a person more time to play Go.

At first sight these seem insurmountable problems, but David Mitchell shared an idea with Tony Oxenham, James Kaaden and Michael Hyde, which has evolved over the past 6 months and addresses a large proportion of the problems.

The solution is not a world shattering big bang idea or piece of technology but the assemblage of components that together work to create a virtual Go Club - The Australian Online Go Club. Using common Internet services, the club enables people to find each other, arrange games at a convenient time and eliminate travel. This in turn leads to the creation of friendships across the country. In addition, volunteer teachers play teaching games and give lectures which form a video library that will help people learn in the short and long term. 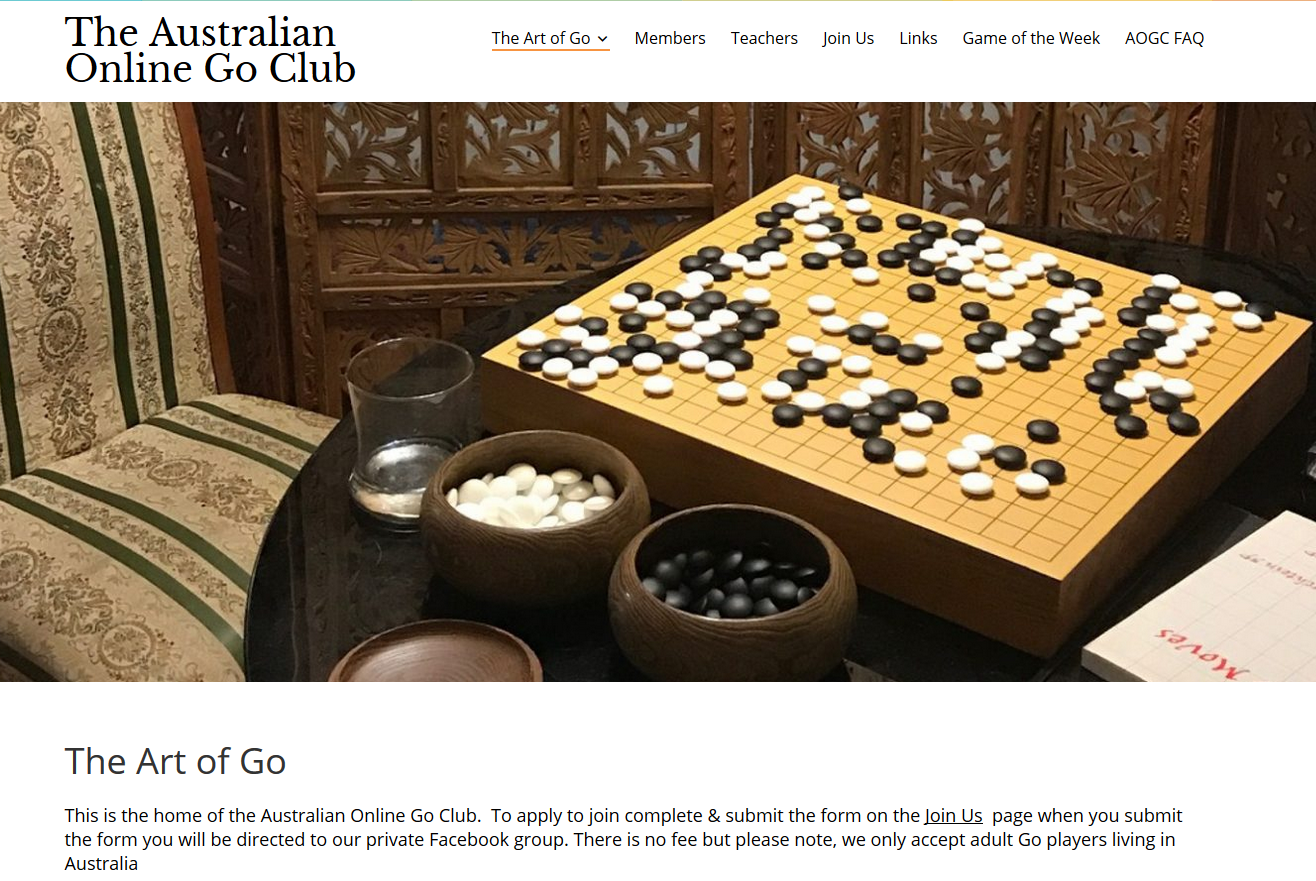 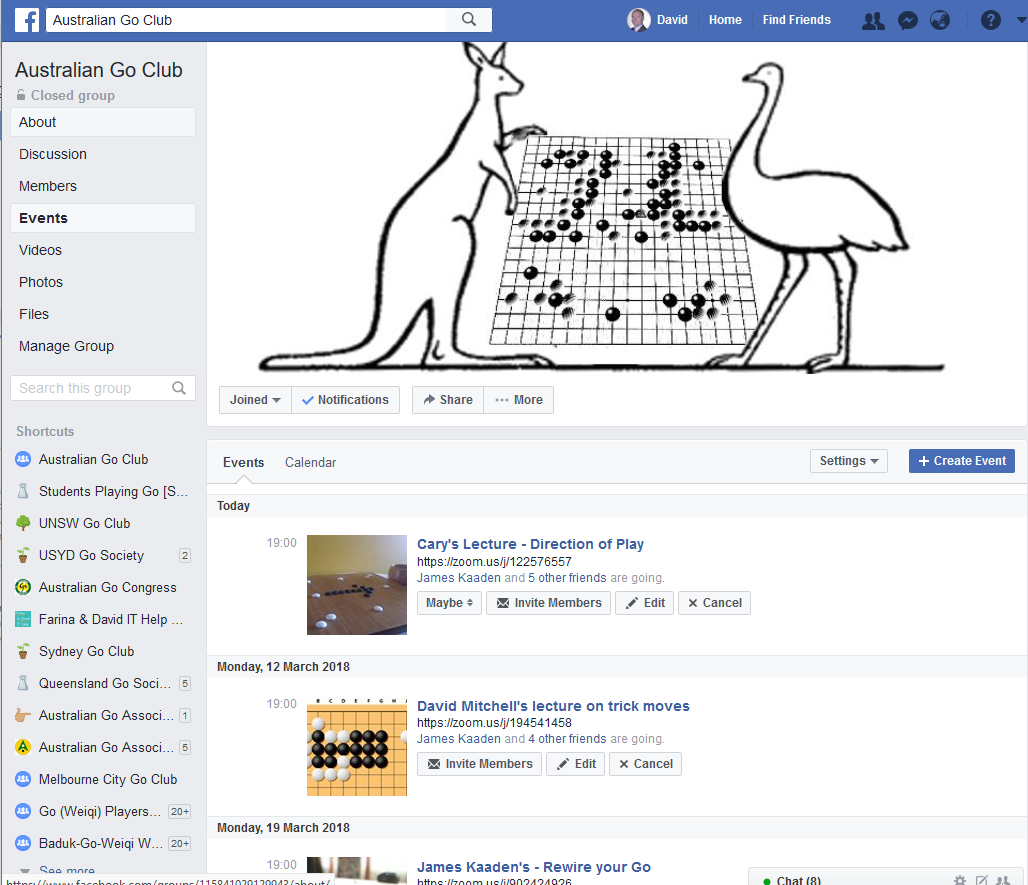 To provide a place where people from across Australia can find other Australian Go players so they can play, teach and learn. The target audience are kyu players and those in remote areas. Volunteer Dan players will provide teaching and game commentaries, including lectures and rank specific workshops.

There are over 40 members of the club, two thirds of which are kyu players. There are six volunteer teachers who play games with kyu players, comment on the games or other submitted games and give lectures and workshops. The club has over 60 teaching videos for members and that library is growing on average by 5 videos a week.

This is not a project for publicity or general awareness. The project aims to address the problems faced by existing players and those beginning to learn. The key problems faced by Australian players are ‘not enough players in my area’, ‘no AGA club near where I live or work’, ‘not enough time to play’, ‘hard to find a teacher’ and ‘hard to improve’.

Establishing the club took no more than a couple of hours work - creating a Facebook page and inviting a select group to join.
The services and facilities we use are self-managing with the hardest administration process being the registration of new members on the website which consists of adding their name, rank and state to a table on the website (about 2 minutes work per member). The supporting websites are WordPress sites using standard templates and plugins - they took about 4 hours to establish and take no more than 10 minutes work a week to maintain.
Day to day effort is the biggest cost - playing teaching games or reviewing games does take time. Game commentaries generally take about 40 minutes plus the time to play the game but we are particularly pleased with the reception of the game commentary videos, each video is watched by around 10 people so the effort is well worthwhile.

The club will extend services and facilities to members. The club started with just teaching games and commentaries. We have added lectures and workshops to the mix. We will add other teaching methods and services for members depending on demand.
It has been suggested that New Zealand be included. The problem is that the club currently spans 4 time zones (3 hours across); adding New Zealand would increase that to 5 hours which does not make for a cohesive club.

We believe this solution to be scalable and portable. The scope of a virtual club does not have to span a continent; it can be a smaller area, but we believe that scaling to an international level will miss the point. People who join, want a friendly social environment. Go servers have shown that is not possible on a global scale.

We wish to share the idea in the hope that others will benefit from it. We do not seek or need any assistance.

Please see the attached document which explains our activities further.