Summary Go Books by SmartGo is an app specialized for reading books about Go. You can replay moves within diagrams, study variations, and solve problems, all without the need to place stones on a physical board. The app is available for iPad, iPhone, and Macintosh, with Android in the works.The app presents over 100 Go books that readers can buy directly within the app or through the gobooks.com website, usually at about half the price of the corresponding physical book. The app contains a free sample chapter for each book. Multilingual books contain all the languages in a single book, and readers can choose which language they want to read it in. They can also choose to see two languages to brush up on their language skills. The Go Books file format is designed to make it easy to create figures and diagrams. It's also designed to make it easy to add additional translations.

The Go Books app includes 10 books that are multilingual (translations include Japanese, French, Spanish, German, Italian, Dutch and Turkish). You can switch the text on-the-fly between the languages, or choose to see two languages - ideal for brushing up on your language skills.

The series “Black to Play” for beginners and intermediate players is a great example of the multilingual possibilities. The first volume dedicated to players from 30 kyu (beginners) to 25 kyu is currently available in seven different languages: English, French, Spanish, German, Italian, Dutch and Turkish. Volume 2 to 4 (from 25 kyu to 10 kyu) don't cover the full range of languages yet, but are in the process of being added step by step. This way people from all over the world interested in Go and studying Go techniques are not only limited to books published in English or one of the Asian languages, but can rely on their own mother tongue, thus making it easier to access and appreciate the game of Go. You get all languages in one book, and you just pay once. 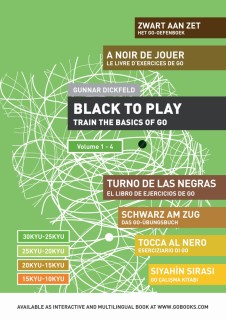 Go Books started with 8 books in April 2011 and has grown steadily to over 100 books, including 10 multilingual books, 7 out-of-print books, and 12 books not available in printed form.

Worldwide, where Internet and mobile devices are available.

The aim of the project is to make use of modern technologies to provide high-quality interactive multilingual books about the game of Go.

All levels of Go players, from very beginner to high dan level. Any publisher of Go books, including self-publishing authors. Go Books file format The first twenty books were created using an extension of the SGF file format, but the mismatch between the tree structure of SGF and the more linear structure of a book made the process of creating books cumbersome and error prone. The Go Books file format was designed to make it easy to create multilingual Go books with figures, diagrams, and problems. It adds features like inline diagrams that allow cryptic move sequences embedded in the text to be shown as a diagram instead. This file format is work in progress, but it has already proven itself in a shipping product that includes more than hundred Go books with a total of over 55,000 figures and diagrams and 7,000 problems. The file format is described in detail at: http://smartgo.com/pdf/gobookformat.pdf To obtain a copy of a book people can go to the website https://gobooks.com, choose the book they want, click and buy using their email address, and finally download the book within the free Go Books app. On iPad or iPhone, you can also use in-app purchase. If a book has been updated, e.g. to fix typos or add another language, the new version is downloaded automatically. 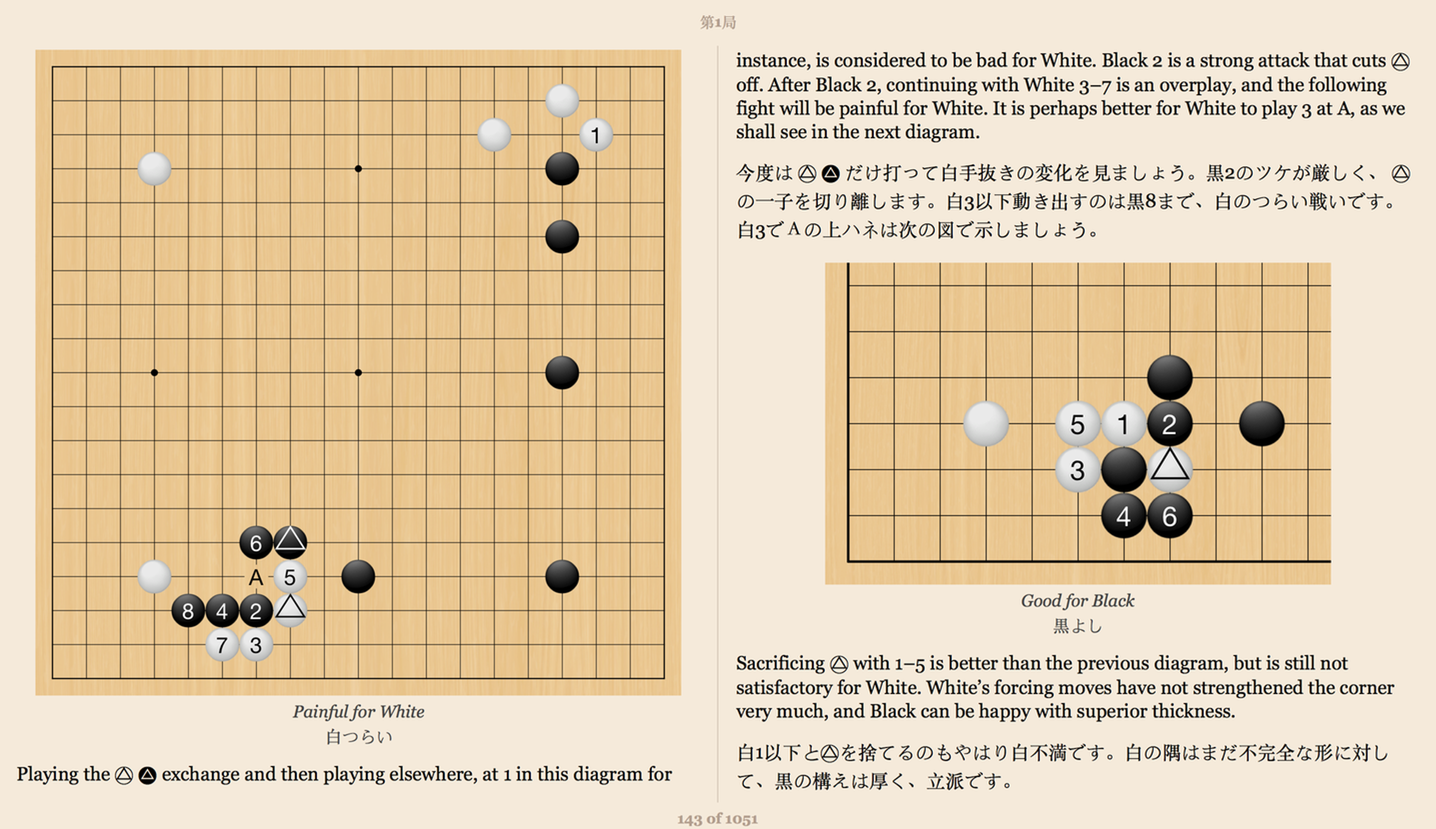 Financial budget to initiate the project was provided by Smart Go, Inc.

While printed books are still common, future Go players will increasingly learn and study Go on their mobile devices. The Go Books project aims to give those players the tools they need by bringing books about Go into the digital age. We've created digital books that Go players love to read and that help them study the game, and we've made it easier for authors and publishers to create such books, even in multiple languages. We're confident that Go Books will continue to grow and hopeful that it will help promote Go around the world.

A strong worldwide Go community appreciating the beauty of Go. Any prize money from the Iwamoto Award will be used to increase the number of multilingual books and the coverage of languages.