BadukMovies.com is a website with videos about the boardgame Go. A new video is uploaded every week on Monday morning. The video-lessons are in English, generally between 5-30 minutes long and cover a broad variety of go topics. The main creators are Peter Brouwer 6dan and Kim Ouweleen 4dan, based in Amsterdam, the Netherlands.

The focus of the videos is on the fun in go: things that are out of the ordinary, new or tricky ideas and most of all (absurd) humor.

The content for the videos is made by professional go players from all over the world, as well as top amateur players. These professional lessons are formed into videos by Peter and Kim, who record them in their studio in Amsterdam.

BadukMovies is different from other go video projects in its humoristic approach. Go can be a serious and difficult game, but should foremost be and stay fun. Because of the absurd humor in the videos, the videos are popular and easily shared through social media.

The website BadukMovies.com is the home base. Peter Brouwer is a programmer by profession and has constructed the website using Ruby on Rails. All our videos are accessible on this page, as well as a database of more than 50.000 professional game records with a built in pattern search function.We use Facebook and Twitter as social media to update go enthusiasts on what we are doing. More than just that, our Facebook page has become a kind of community where we share and post go related topics with over a thousand followers. We use Youtube to post many of our free videos and blooper material. On Spreadshirt we have a little shop with t-shirts and other go products. 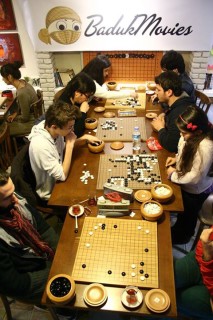 From the start of the project in 2012 to now BadukMovies has grown steadily. It is now amongst the well known go pages on the internet, a name that most go players have heard of. So far we have created over 200 videos with the help of numerous professional and top amateur go players. Over the years we have developed from just a website with go videos to a platform that helps other go related initiatives and contributes to the international promotion of Go. We have become sponsors of many tournaments throughout Europe, on the internet and in real life, in countries such as the Netherlands, Belgium, Germany and Turkey. As a mutual cooperation we have traveled to Japan in September 2014 where we were allowed to film live professional lessons at the Nihon Ki-in Summer Go Camp. Our recordings were used on our website and on youtube as promotion for the camp.

In late 2012 when we made the transition from only free videos to mostly paid videos for members, we had envisioned this as a system to reward our own efforts. By now we have come to the conclusion that instead we are more of a service hatch in the international Go chain. At the moment we have 80 paying members on our website. With the money that comes in, we pay some of the top amateur go players in Europe to create content for us.

The focus of BadukMovies is providing the Western go audience with an extensive collection of go knowledge in English. The addition of a database with a large number of professional game records was a great step forward. This is a valuable tool for many go players that strive to become stronger and wish to study the game.

BadukMovies is a name familiar to many online and real life tournaments / leagues in Europe, as well as to the more wellknown pages about go on the internet. We sponsor numerous go initiatives with prizes that can be claimed through our website (i.e. PRO memberships). We have had good contact / worked together with the Dutch Go Association, the Nihon Ki-in and the Korean television channel BadukTV.Some statistics of the website: - 613 users (people that made an account on our website) - 80 paying members (PRO accounts) - 557000 visitors since the start in 2012, from 154 countries -On average 150 visitors per day - Highest peak was 31st of July 2013, with 1058 visitors, just after uploading episode #89 'Fools Follow Rules' which was a success on Facebook and Reddit - 1096 followers on Facebook - 639 followers on Twitter - Our top 3 countries in terms of number of visitors are the United States, the Netherlands and France - Fun fact: Our BadukMovies 'Samurai' shirt was worn in a talkshow about Go on Turkish television. 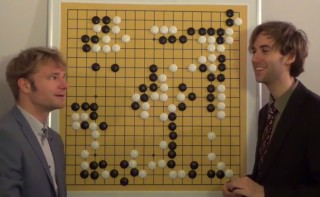 Peter Brouwer and Kim Ouweleen are the main makers of BadukMovies. We work together with professional and top amateur go players to post a new go video on the website every week. Each week at least one full day of work goes into this for us. The content provided by the professionals is done through .sgf-files, which have to be perfected by us and then recorded by us into videos that we then put on the website.

The PRO videos on BadukMovies can be accessed through a membership, which costs 8 euros per month. Those who have a membership can watch and download all the PRO videos that are on the website. The PRO members are the only main source that generate income for BadukMovies. The money that comes in is spent on paying strong Go players to make new content for the videos.

Two of our main goals for the near future:

The wish for BadukMovies is to work together with national and international go associations. We have a good connection with BadukTV and hope to get in contact with WeiqiTV as well. We hope to work together with the new European Pro players and hire them to make content for our videos. Financial support would be fantastic.